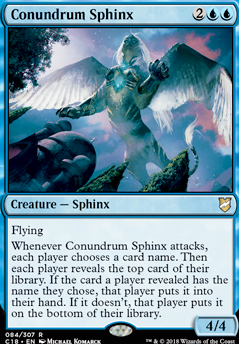 Conundrum Sphinx occurrence in decks from the last year 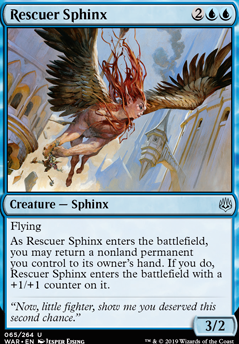 Well, names renamed, &... nothing. This isn't entirely Spellslinging. Nor is it straight out Disco Inferno of 1979, or self-protection from harm. It's all 3 at one time. Sorry, TypicalTimmy, but that's how I devised this deck to be. Maybe you can help from this aspect from here? 3 qualities that make this deck what I wanted it to be. If you wanted me to just do Spellslingers, I had a deck like that awhile back, but I'd rather a Variety of Deck Types, & not too much of the same typical kind of thing; this is why nobody wants to help with my Jhoira #1 CHAOS deck; nobody seems to know the following Goldilocks Effect of MTG I'll mention as a scale: Grip of Chaos : Too HOT! -> (Just Right.) <- Too Cold... Conundrum Sphinx

So, if the deck can't be all three types listed, & my Melek Superstorm deck is basically the same thing as a Spellslinger Deck, what would you replace/cut? Sorry again for derailing this to my Jhoira CHAOS deck...

I love these kinds of posts!

I am gonna say Conundrum Sphinx for my post. When I first started to actively collect/deckbuild on my own; this was one of the fist cards that I truly tried to build around from the bottom up. I was CONVINCED that if I had a 4/4 Flying "draw engine" in I would be unbeatable...Granted that wasnt the case but I really had fun building around it with all of the scry and such out there.

I love Conundrum Sphinx and highly recommend running Aqueous Form for essentially having him allow you to draw with every attack.

Thanks for the upvote JKRice !

Necrotic Ooze sure is a strong candidate for this deck! I think I'll have to squeeze at least one into it.

Too bad it doesn't benefit from: 3x Conundrum Sphinx, 3x Sage of Epityr and 4x Skill Borrower. I also have an idea that this deck should not be hurt too badly by sideboard gravehate... But it's definently something I need to sit down with a stout and think about!