Target opponent exiles the top X cards of his or her library. You may cast any number of nonland cards with converted mana cost X or less from among them without paying their mana costs.

Villainous Wealth occurrence in decks from the last year 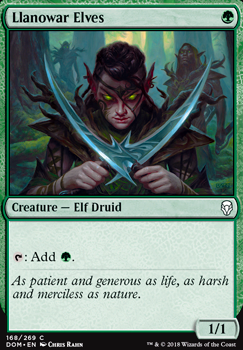 Yarok, the Desecrated
by princeskywalker

Have you thought about adding Scribe of the Mindful to recur Villainous Wealth?

Vorel_84 on What is your favorite card â¦

Definitely Villainous Wealth. I love ramping into that and getting a bunch of stuff, especially with something like Unbound Flourishing. Simic was my first love (RIP Prophet of Kruphix), and I still prefer to play a +1/+1 counters deck, but pulling that card from Khans is what brought me into Sultai colors (and Corpsejack Menace isn't bad either).

There's an infinite/big mana combo that's pretty easy to hit consistently with Peregrine Drake, that usually made it easy to get to In Garruk's Wake, but focusing more on creature synergy keeps it on track.

Yeah, that seems like a great include. I've been actually thinking of cutting Villainous Wealth in this deck, but it's such a good win con.

Hi! One card that might work is Codex Shredder. The reason I'm suggesting it might not be as obvious as it seems. The milling part is fine, sure, not super relevant but it's something. The important part is it's second ability, the Shredder can act as a regrowth effect that you can recur from the graveyard with Muldrotha! Most of the deck you can cast from the graveyard, sure, but regrowing a Villainous Wealth or a River's Rebuke can be huge! Also what I've done sometimes is regrowing a specific card in response to a Bojuka Bog trigger or something like that, which is useful! :D

Things I would cut,

Burnished Hart: Your in green so you have way better ramp. Also, its not an ETB effect.

Fleshbag Marauder and Plaguecrafter are good but they hit you as well.

Wurmcoil Engine: Good card but no ETB. You already have quite a few big threats.

Villainous Wealth: Another good card but off theme. I would only keep if your meta has a lot of ETB triggers.

Wood Elves: It can grab to duel lands that have the forest type.

Farhaven Elf: Same as above but can grab any basic.

Springbloom Druid: Sac two lands but then you get 4. Great ramp and deck thinning.

Doesn't quite get you to 100 but hopefully closer.

Muldrotha, Lady of the Swamp