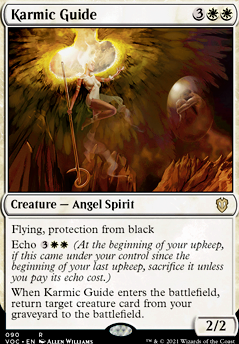 Mentally Screw With Your Friends

First, I have thought that Priest of Forgotten Gods has been undervalued ever since the first time I saw her, so I'll suggest that for sure. Same goes for Bog Witch, Culling the Weak and Innocent Blood.

Next, don't know if you're into the whole Karmic Guide + Reveillark combo (I, myself, intentionally avoid going infinite if I can help it), but I'll drop that here anyway. If you spoke to that in the description, I apologize. I just skimmed through that and might have missed something.

Finally, some more pricey cards worth mentioning that are not in your Maybeboard are Luminous Broodmoth, Michiko Konda, Truth Seeker and Pitiless Plunderer.

I read the previous comments, and I applaud you for intentionally foregoing infinite loops. I feel exactly the same way. Like how I refuse to add that Karmic Guide + Reveillark combo in my Cleverly Named Graveyard Deck. Nor any of the many combos involving Lab Man in neither my Spirit of '76 nor my Ramos Cascade Ramp, nor any other applicable combos.

As for card suggestions, I feel like Chandra's Incinerator might be useful for controlling the board, and Eidolon of the Great Revel makes sense because of your high mana cost distribution (if not also Pyrostatic Pillar, even though it's a noncreature), and also because this deck seems most effective against decks with incredibly low mana cost distribution.

You're absolutely right on a lot of levels, and honestly that's what made me feel like this was the right place for my rant. But one more point before I finish.

I think that the majority of the parody exists in the infinite combos. If you look at the comments on the reanimator deck I posted above, you'll notice that I respectfully declined adding the Karmic Guide + Reveillark combo. I have hence found that combo in 9-out-of-10 reanimator decks, give or take.

But then, to use the example you gave, why the f would you not put Contagion Engine in every single Atraxa deck? It's a damn good synergy, and you'd be denying yourself the best possible synergy for the deck if you didn't include it. Is it creative or unique? Absolutely not. But it's a no-brainer. It's like, if you want a pillow fort, you include Ghostly Prison and Propaganda. If you want ramp in 5-color, you run Cryptolith Rite and Bloom Tender. If you're building a cascade deck, and it doesn't have Maelstrom Wanderer or Maelstrom Nexus, are you even trying? These are the best cards for their respective themes. The creative element is in choosing what spells you place around the obvious ones.

Back in the day, if you were building a suicide black deck, you included Necropotence, because that card was the definition of suicide black. If you had a draw deck, it had Underworld Dreams in it, because otherwise there was no point. A helluva lot of cards have been printed since then, but the results are the same. If you play this theme, you should include these cards. If you can figure out a way to still be unique and creative, you're above the curve in my book.

Again, please take no offense. This is a general rant not meant specifically for you. My only point is that there's a lot of parody because there's only so many cards that are the best cards for any given theme. Players like you and I - and we're not alone, even if we're the minority - will still find a way to build different. We play for fun, even if ultimately we would like to win more often than not. Whenever I see decks on here that are obviously EDHREC copypasta, I generally ignore them. But I won't besmirch them being what they are.

You see? I did get around to looking at your deck!

Pretty sweet build. Now that I see your fill package, I feel like I need to see about putting Life from the Loam into my own deck.

Also, Beast Whisperer!!!! Why didn't you recommend that to me? Why didn't I think of that my own damn self?! I'm running more creatures than you, and I never thought of him. He, and Runic Armasaur, will find a way into my deck.

I second the above suggestion of running Blood Artist or, as I do in my deck, Cruel Celebrant. Or, better yet (albeit, for more mana), Syr Konrad, the Grim. Image pulling off the Karmic Guide + Reveillark combo with Grumpy Grim on the field. But it would work with just his little sister.

All in all, you've given me a wealth of ideas. Cheers!

I'm not sure if you're already aware of this, but Ankle Shanker doesn't work with Alesha's ability because he already comes tapped and attacking, while his trigger happens during it's attack declaration. Ignition Team is one I really like in my Alesha deck, he usually enters as a very big beater and when reanimated with Alesha can be deadly. Altar of Dementia , Spawning Pit , Ashnod's Altar . Alesha really smiles at death, so having those sac outlets will be the best way to get the most value out of recurring creatures with your commander. Plus it's an essential enabler if you wish to combo off with Karmic Guide + Reveillark or Anafenza, Kin-Tree Spirit + Murderous Redcap .

ThallionDarkshine on The devil's in the details: â¦

I do agree that generating mana during the combo is not all that useful, but 2-cmc ramp that lets you play Zur a turn early is always good.

I'm also not sold on the 5-cmc tutors, but I'm not sure if there are any better options... Dark Petition might be better for occasionally generating some mana (and fixing it to black if that's what you need). Beseech the Queen might also be a better option. You'd probably never get the chance to cast it for 3, but a slightly worse Diabolic Tutor might be better than one of the other options. Sidisi, Undead Vizier is another possibility, and can be recurred via Karmic Guide.

I think Altar of Dementia might be better than Altar of the Brood. While costing another mana, it works the same in your Intruder Alarm combos, and also works with Fiend Hunter + Sun Titan and Karmic Guide + Reveillark . Finally, I think Animate Dead is probably a great inclusion. You can tutor it with Zur to recur your stuff, and it can combo with Sun Titan.