Partner with Nikara, Lair Scavenger (When this creature enters the battlefield, target player may put Nikara into their hand from their library, then shuffle.)

When Yannik, Scavenging Sentinel enters the battlefield, exile another creature you control until Yannik leaves the battlefield. When you do, distribute X +1/+1 counters among any number of target creatures, where X is the exiled creature's power. 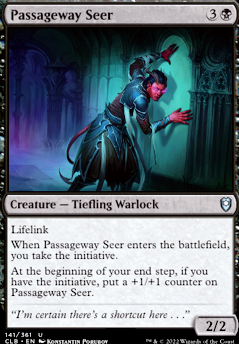 draw the game half of it though
by logancat314

Yannik the ghost
by KeatonSpace

â­ Harley and that hunky Wayne guy â­
by HeatherMason

Norn's Choirmaster feels like it's just going to be an expensive Grateful Apparition most of the time. The main exceptions are partner decks with a counter theme, e.g. Reyhan, Last of the Abzan + Tymna the Weaver or Yannik, Scavenging Sentinel + Nikara, Lair Scavenger. Maybe you could also use it in a flicker + counters theme deck?

(Speaking of which, when is black getting a Thrummingbird?)

Even though it's pretty weird that the mirran faction mechanic is a tweak on living weapon, I like the implied flavor of the token probably dying and then someone else taking up the sword, so to speak.

Without the haste, Goldwardens' Gambit could have easily been a white instant.

A little awkward that Otharri, Suns' Glory synergizes with proliferate

With corrupted around, Caress of Phyrexia got a little more interesting

Gidgetimer on Can I target Myriad Construct â¦

Correct. Myriad Construct only sacrifices itself when targeted by a spell, and Yannik, Scavenging Sentinel is targeting with abilities.

Kret on Can I target Myriad Construct â¦

I agree with bushido_man96, consider cutting the life gaining strategy?

You're not comboing with Sanguine Bond and it's a higher mana cost card that's not a creature. Gray Merchant of Asphodel does much less if you're not using it in a combo as the wincon. Dawn of Hope is good repeatable draw when your Commander has lifelink, but attacking with Nethroi shouldn't be priority since you're really playing it for it's 7 mana mutate reanimation not to consistently attacking.

Drizzt Do'Urden and Demon of Loathing are subpar. Yannik, Scavenging Sentinel is another creature who can combo with Karmic Guide and a sac outlet for another all creature wincon combo that Nethroi can reanimate.

veritablecvn on Does this work?

No, exiling a creature with Yannik, Scavenging Sentinel does not trigger Abzan Ascendancy. Exiling and dying are different actions.

Rule 700.4 states: The term dies means âis put into a graveyard from the battlefield.â

legendofa, Oh, the possibilities. You could go voltron with Ardenn, Intrepid Archaeologist , Anara, Wolvid Familiar or Keleth, Sunmane Familiar , and you could also have an interesting build with Halana, Kessig Ranger , but I'd probably go with Bruse Tarl, Boorish Herder . The whole time, though, I'd be wishing that Yannik, Scavenging Sentinel didn't have a specific partner.

Although, having him in there with Ishai, Ojutai Dragonspeaker just to get the color identity to five colors would make for a pretty sick stax build.