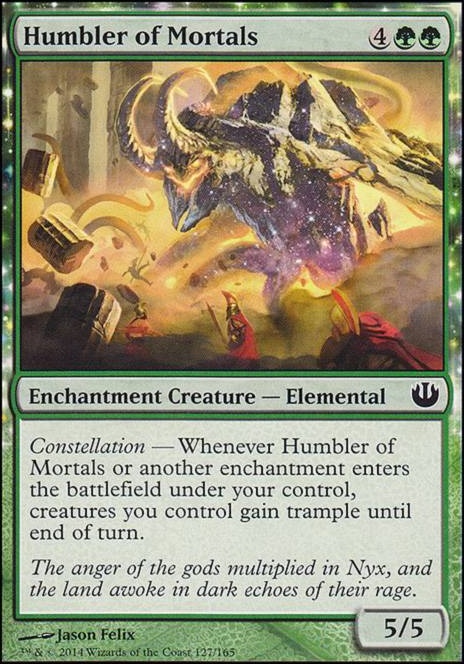 Constellation â Whenever Humbler of Mortals or another enchantment enters the battlefield under your control, creatures you control gain trample until end of turn. 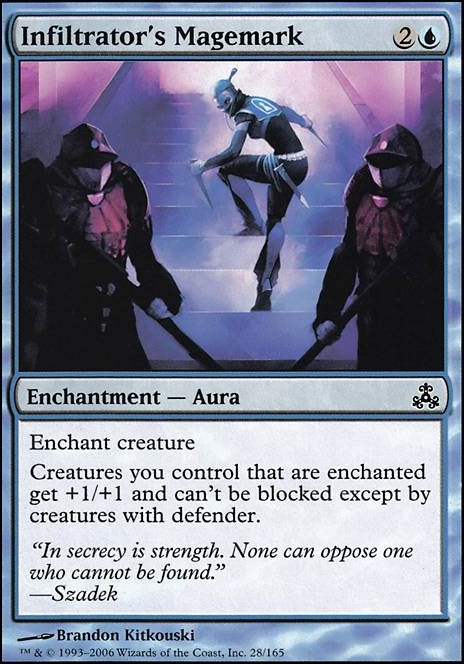 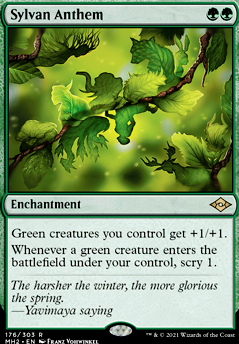 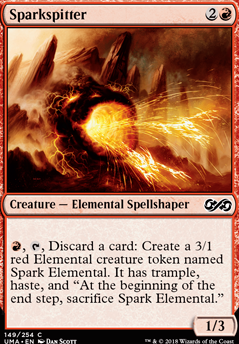 And some trample effects could be very strong too.

Humbler of Mortals and Stampeding Elk Herd are the best creatures that can grant trample IMO.

One of my favorite interactions in mono-green is using Rancor, Broken Fall, and Whip Silk in conjunction with Humbler of Mortals to give everything trample consistently. I saw you have Crowned Ceratok but thought I'd throw it out there. I'd also consider Ambush Krotiq and Ancestral Statue to reuse cheap ETB creatures, though it does reset their counters. I think your ramp looks fine, with the recursion and hexproof spells you already have I don't see Guardian ever becoming prohibitively expensive.

@ SIES_Abzan Sorry I haven't got back to you sooner! It has been a long week for me, so I hope it's fine that I am responding a little bit later than I would have liked :) Before I get into cuts, I do want to go over a few more cards which should definitely be considered. This will probably make my list of cards to cut longer, but I definitely forgot some cards you should add to your deck!

Felidar Sovereign - I didn't realize you were running a lifegain sub-theme, but since you are, this card is almost a must. It can win games out of nowhere and gives you a way to win that doesn't involve combat. Test of Endurance - Same as above except the life threshold is 50, rather than Felidar Sovereign's 40 life. Austere Command - While it is a little expensive (both in mana cost and real-world money), Austere Command provides a board wipe that is always relevant and incredibly versatile in its uses! Aura of Silence - Amazing artifact/enchantment hate that is also an enchantment itself. This card has won me so many games in my own decks! Sphere of Safety - Discourages your opponents from attacking you and scales incredibly well with all the enchantments you are running. Ghostly Prison - A cheaper, but ultimately less effective Sphere of Safety; still worth consideration though! Rest in Peace - A piece of graveyard hate that can be incredible depending on your meta and the amount of black decks that see play. Exploration - Absolutely amazing enchantment that helps you ramp and makes for a great turn 1 or 2 play! Ajani, Mentor of Heroes - A great planeswalker who synergizes with both your lifegain and voltron gameplans! However, it might be a little outside of your budget. Winds of Rath - Another synergistic board wipe that protects your creatures while killing those of your opponents! Unflinching Courage - Great aura that provides lifelink and trample, two very relevant abilities for your deck!

Humbler of Mortals - Too expensive for the effect he provides :( Plus, you should try to lower the number of creatures you have in favor of more enchantments. Fate Unraveler - Doesn't synergize with what your deck is trying to do and will most likely aggravate your opponents, rather than win you games. Brain Maggot - An underwhelming creature, which frankly sucks in commander as it doesn't scale well in multiplayer. Dictate of Erebos - Your deck isn't trying to sacrifice creatures in order to abuse effects like this, so I would just get rid of it in order to make room for a more synergistic enchantment card. Treasury Thrull - I feel like it is just too slow and expensive to be good for a deck like this. Benefaction of Rhonas - A pretty bad draw/tutor card if you ask me. I would replace it with either Abzan Charm, Idyllic Tutor or Sterling Grove!

That's all I have for now, contact me if you have any more questions! Good luck!

The7thBobba, thank you for the suggestion! I took out one plains to incorporate it in! It works especially well with Humbler of Mortals and any enchantment hitting the battlefield... AKA trample.