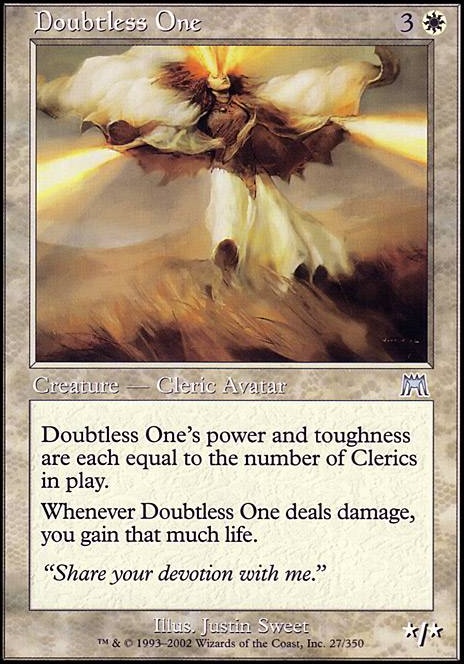 Doubtless One's power and toughness are each equal to the number of Clerics on the battlefield.

Whenever Doubtless One deals damage, you gain that much life.

@#$% your life gain, Jason.
by AngelDiscarnate

Rachel's Clerics and Angels
by DrummerGarrett

Ophilias on Could Use Some Feedback on â¦

Hey everyone! I've got a White/Black Cleric deck that I'm wanting some advice on. As you'll see, it's largely focused on reducing damage and life gain. The current win conditions are pretty much limited to Profane Prayers and Doubtless One.

What I'm hoping for here is some advice on possibly streamlining my win conditions as well as any obvious improvements that can be made to my efficacy at reducing incoming damage. I do have more Battletide Alchemist on order since I really like them.

It's different, i like it. Have to ask tho, why no Doubtless One ?