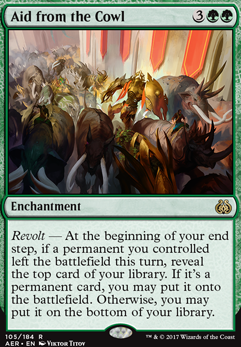 Roon of the Hidden Realm
by Papini

I Rebel - Therefore We Exist
by Naxes

Aid from the Cowl Discussion

Alright. I am not too fond of graveyard strategies myself, though I have tinkered vehemently with Alesha , Muldrotha Adun Oakenshield , so I'll see where that gets me.

Victimize is never lacking as it cheats out giants whilst providing sacrifice, Dread Return fills a very similar role, Eternal Witness is always great, Blood for Bones loops with the Witness , and Animate Dead is always great.

Now, cantrips: Grisly Salvage , Winding Way , Grapple with the Past , Ransack the Lab , and Once Upon a Time all filter through the deck, fill the graveyard, save for Once Upon a Time , and find lands or creatures. Furthermore, they are great with Meren , as creatures are to be disinterred.

For ramp, mana dorks are great. Birds of Paradise , Llanowar Elves , Elvish Mystic , Fyndhorn Elves , and Elves of Deep Shadow offer fodder and acceleration. The best is probably Skull Prophet . Mill, fodder, and ramp in one.