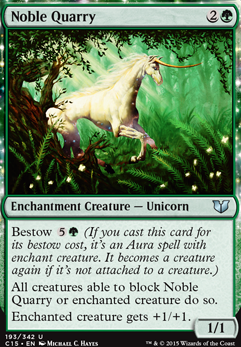 Bestow (If you cast this spell for its bestow cost, it's an Aura spell with enchant creature. It becomes a creature again if it's not attached to a creature.)

All creatures able to block Noble Quarry or enchanted creature do so.

Swell the host mod
by n_arden 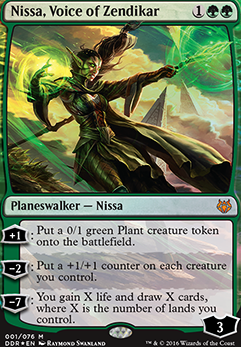 Steamrolled (Banding + Rampage + All must block)
by Ju1ceB0x

The Sliver Army
by guiltedrose

Heart-Piercer Bow takes out a creature on attack instead of by tapping.

If your creatures have Deathtouch try to give them First Strike. Direct damage from pinging won't work on the guys with Hexproof or Shroud (which is almost always a problem).

One good attack should finish off an opponent with poison damage as long as you don't get blocked. Nessian Boar , Nemesis Mask , Noble Quarry etc.

Vigor means you don't lose guys from being blocked or blocking. Really hard to NOT put Vigor in a green deck for me. Price ranges from 5 to 15 bucks though

Vorinclex is definitely a great addition. Rhonas as well (I LOVE Amonkhet). I'd definitely recommend anything that adds a Lure effect. Lure , Noble Quarry , Taunting Elf , Shinen of Life's Roar and Alluring Scent are a few of that type of effect in mono green. Fill the board with all the deathtouchers and drop one of these lure effects and that's basically game. You might also want to think about adding more protection for Fynn himself. Ranger's Guile , Blossoming Defense , Heroic Intervention etc. If he attracts as much attention in Commander as he does in my historic deck on Arena, he's gonna need all the protection he can get.

Thank you kpres. I was looking at cards that simply just deal 1 damage to a target like my Pathway Arrows. Though I was looking for something that uses less mana than pathway arrows or can do damage to players. This would be a great way to keep my blockers and still eliminate enemy's blockers.

Then the more I play it the more I see how valuable first and double strike is. I definitely need to do some more research on anything to throw into the deck.

Also I actually have the Noble Quarry and completely forgot about it. I'll see about getting rid of something for it. I know it would work great in here.