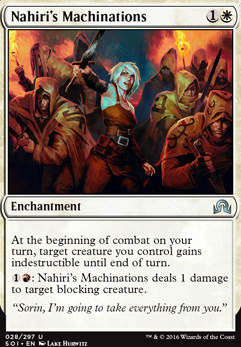 At the beginning of combat on your turn, target creature you control gains indestructible until end of turn.

Burningdragon91 I used to run with Reconnaissance and Nahiri's Machinations but they were both dead cards. With 3 opponents, someone is ALWAYS open or has 1 creature to use any of the single target removal, OR first strike just overrules their blocker. Narset games don't last long. HOWEVER, if they "do," there are 2 creature board wipes to cast to remove what you need: Catastrophe , Cyclonic Rift (also single target), and Cataclysm .

A Fun Narset Deck (No, Really)

Zurgoltron, thanks for your comment, friend! I may have been a little misleading by my $5 price tag -- I meant that I spent $5 on new cards, while the rest was random, seemingly unplayable junk from my collection. I bought stuff like Sunforger and Sigarda's Aid, and also jammed old bulk like Into the Maw of Hell, and it slayed in my casual playgroup to the point where it got a little boring for me. Unfortunately, that means it's been 3 years since this deck was a Voltron build, and I couldn't reconstruct it exactly if I tried.

However, judging from your username, I'd guess you have the basics of a Voltron strategy down to where you wouldn't need my actual list for the basics. I think Narset's real innovation comes when you realize that she can cast complete haymakers (think Star of Extinction, Omniscience, Indestructibility and friends) for free, so your CMC only matters if you can cast her, then keep her alive for a single combat. If you cast Nahiri's Machinations to swing and get two or three CMC>6 hits with her ability, you shouldn't need to worry about much after that except getting hated out.

I hope that helps a bit. In addition, I'd love to take a look at whatever list you've been brewing up and provide feedback based on my Narset experience! Cheers!

I suggest to add Kor Cartographer even if it isn't a soldier but being able to put plains into play seems very useful in R/W. Burnished Hart and Myriad Landscape can help as well if you have ramp issues or want to focus more on emeria or high mana cards. Unfortunately the last two cards might be too slow.

If you add some more equipments like Lightning Greaves for the angels (other protection might be Nahiri's Machinations but I don't think it is as good if you have many tokens / little creatures), Taj-Nar Swordsmith might be a good inclusion. Marshal's Anthem might be good for the tokens + revivng creatures.

How good is Gleam of Battle? It seems very expensive for what it does.

I enjoy the concept. You need more lands, though. You are never casting 11- and 12-drops off 29 mana-producing lands and three mana rocks. I assume those Islands are supposed to be Swamps. I'd cut the Sword and Helm of Kaldra since you just need the shield for indestructibility. Maybe Angelic Overseer also, since you don't have many Humans and your commander isn't human, either. Myriad Landscape, Temple of the False God and Shrine of the Forsaken Gods would be good adds. Plus more dual lands. And mana rocks.

I also only see like three board wipes, and only one of them kills lands! Where's the Obliterate and the Jokulhaups? Bearer of the Heavens? Hour of Revelation! Akroma's Vengeance! Blow it all up!

Some other indestructible (or pseudo-indestructible) enablers: Gift of Immortality, Nahiri's Machinations, Frontline Medic, or Legion's Initiative. I like Valorous Stance too, because it fits with the theme and can also kill something if you need something killed.