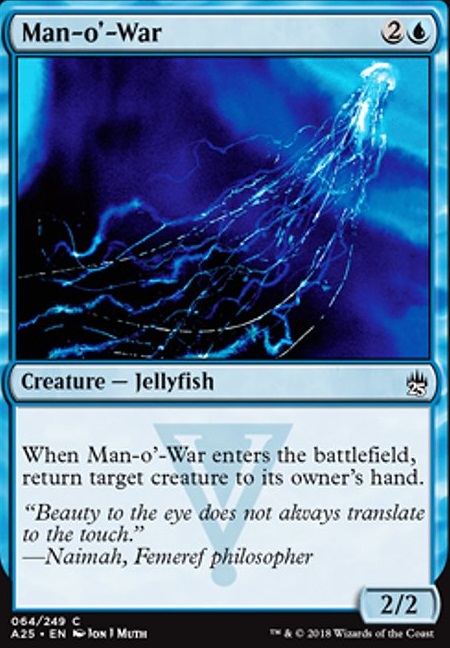 When Man-o'-War enters the battlefield, return target creature to its owner's hand.

Man-o'-War occurrence in decks from the last year 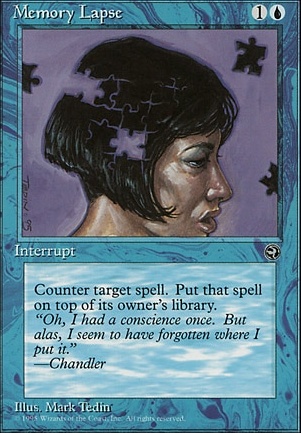 Yarok, my Johnson
by muffpuncher

First deck in a while!

I think rather than use a simic ETB sub theme with Selkie Hedge-Mage / Man-o'-War and Snap if you were to go "all-in" on Shorecrasher Mimic with lots of draw provided with Cold-Eyed Selkie (which you can put counters on) and Spreading Seas you can ultimately speed up your games via unblockable/huge fish... maybe consider Vapor Snag for clearing away blockers?

Something to consider too is Shrieking Drake and Man-o'-War both go infinite with peregrine drake and yarok out. Also can bounce a creature and themself back to your hand with Yarok out to get another go on your ETBs.

Ahem, so first things first - your lack of deck description makes things really difficult for me, or anyone to really give meaningful feedback as I along with you apparently don't know what you're trying to do with this deck. A good start however for writing up a good deck description would be Epochalyptik's Do you want to write a Primer?.

At first glace all I can say is that 46 Creatures is alot - almost half of your deck. While the creatures you chose all provide excellent value, maybe you could cut a few to make room for some more interaction - which your deck lacks severely. Having a few good removal options in form of:

Could buy you time, especially if your opponents keep removing your commander - which in my opinion is the deck's greatest strength and weakness. Since you're in blue, it never hurts to spec into some counter magic:

You can at least have some say when your opponents target your board when you start to get out of control as you cast more and more things. I remember seeing an interesting post about Chulane on the cEDH subreddit, this particular post detailed a bunch of combos - i'll leave the post here but here's just a sample:

There's plenty there on the sub-reddit to help you go down the proverbial rabbit hole, so I encourage you to check it out and see what combo(s) take your interest. Again I want to emphasize this - please make a proper deck description - it not only helps you but everyone who visits your page. Good luck in your deck building. Also, +1 - for a new deck.

As said in the other Chulane deck I saw, Aluren is such a great card that there's no reason not to play it.

Sure, you won't Walking Ballista win with it. You will, however, Aetherflux Reservoir win with it.

Aluren + Shrieking Drake , Whitemane Lion , Man-o'-War , Dream Stalker , Fleetfoot Panther , or Silver Drake is infinite castings. Playing into 3 times as many creatures to combo off with is, statistically, far more favorable and leads to a rather peculiar if not overlooked Bant Storm win.

Check out my build. I definitely keep the Food Chain combo in, since it can be a turn 2 win, and it is very good, but I also went balls out and threw a huge heft of Aluren spice in there.

I am also very fond of things like Collector Ouphe to simply shut down Sol Ring , Mana Crypt , Mana Vault , and given Mox that's legal, and even opposing Aetherfluxes (in which case I will Aluren win with Laboratory Maniac , Jace, Wielder of Mysteries , or even Approach of the Second Sun .

...along with Shrieking Drake , Whitemane Lion , or Man-o'-War . Probably a better package than the "cast from exile" creatures.

I would throw in some counters, counterspell, mystic confluence, swan song etc. cyclonic rift is also really strong in any deck with blue!