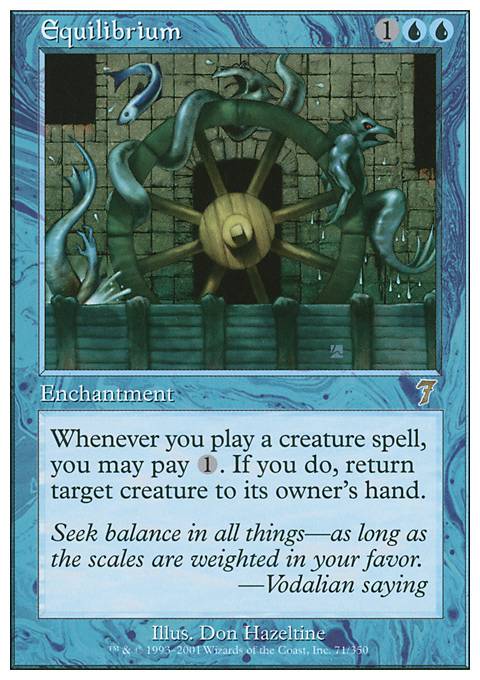 Whenever you play a creature spell, you may pay . If you do, return target creature to its owner's hand.

Chulane of Infinite Turn 5?
by 1Username

I've never seen a lot of the cards you're running and I love it. Equilibrium is one of the coolest blue cards I've seen in a while. If you're running Tribute Mage and also want protection for Sen Triplets why not: Swiftfoot Boots or Lightning Greaves. Diplomatic Immunity is also a swell way to protect them. Check out Girls Just Wanna Have Fun it's my ultra strong Sen Triplets deck for more.

Equilibrium is a nice card to give you back creatures to flip them again. It works really well.

Owning a card asap is typically your best bet. When you own the card, price jumps benefit you instead of hindering you. I picked up a foil 7th Edition Equilibrium

when it was worth $20... now it's the most expensive card I own and is over 15x its original value. Gilded Drake I traded a fnm foil Fatal Push for straight across when they were both $20.