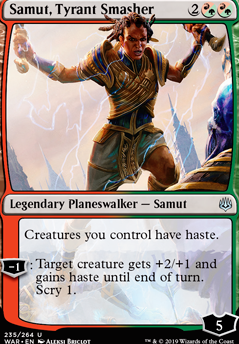 and add Samut, Tyrant Smasher to Sideboard for 1 Aggressive Mammoth

@djnewellmit Good call! Arlinn Kord  Flip is way better than Samut, Tyrant Smasher at the very least. So many tempting options, depending on how "all-in" it's best to go. So much testing to do; so little time!

Samut, Tyrant Smasher feels interesting as it can instantly win the game but that's after we combo off. This is also why I run March of the Multitudes instead of Finale of Glory . An instant speed march at the end of their turn allows for us to dodge board wipes so I feel like march does by itself what samut + Finale would want to do together. The fact that Samut enables the fourth color and haste enabling is still interesting but I don't know if it's good enough to drop something for, suggestions?

Also Oko is simply better than jace and once we combo off and draw our deck with Hydroid Krasis Jace isn't needed to win.

Hey looking at your list i feel like you are missing a haste enabler. something like Samut, Tyrant Smasher , Samut, Voice of Dissent , Fires of Yavimaya , Anger , Hammer of Purphoros , Fervor

Gleeock Have you thought about adding Nahiri, Storm of Stone , Samut, Tyrant Smasher , Ilharg, the Raze-Boar from the play testing I have done they help quite a bit especially with Nahiri giving everything first strike. Makes it so that even if they can block they might not want to. Another card that might help would be Storm the Citadel forcing your opponents to block unless they want to loose everything.

Who You Calling A Fossil?

Actually, I will give a few thoughts.

The Immortal Sun - What does this do for your deck or game plan? It tries to do a lot but instead only does a little of a bunch of things for too high of a cost.

Lifecrafter's Bestiary - Doesn't do enough and costs extra every time you want to activate it. Instead run Elemental Bond or Guardian Project .

Rishkar's Expertise - Most of your creatures are going to cost more than it can provide, so it's honestly not worth it. Look into Sylvan Library and Colossal Majesty instead.

Harmonize - I'm not a fan of paying mana to draw cards as it tends to kill most of what you were going to do on your turn. Instead look into cards like Defense of the Heart or Descendants' Path .

Decimate - Zacama, Primal Calamity should take care of most of your artifact and enchantment destruction on his own, making this redundant, but this card also comes with the unfortunate problem that you can ONLY cast it if you have viable creature, artifact, enchantment, AND land targets. If you are missing any one of the 4 it's a dead card, and if one of those 4 is your own then you're forced to destroy that. Now, if you find that you really need more artifact and enchantment hate look into cards like Krosan Grip or Force of Vigor .

Savage Stomp - Why would you risk your creatures with this? If you are able to target them then you already have removal in the form of Path to Exile or Swords to Plowshares , not to mention Zacama, Primal Calamity ability to deal damage to creatures. If your opponent has a combat trick then you just lost your creature. It's a gimmicky card and I think there are better things you can do with the card slot in your deck. For example, Aggravated Assault or Reckless Assault will give you multiple combats which will really let you bring the full power of your dinosaurs to bear without giving your opponents time to recover.

Commune with Dinosaurs - A waste. Run Sylvan Library or Sensei's Divining Top for much better and more consistent effects.

Priest of the Wakening Sun - Why? If you need a fetch then run cards like Worldly Tutor , Finale of Devastation or Chord of Calling . If you need lifegain there are plenty of better sources. This just reveals cards in your hand to your opponents, gains a tiny bit of life, and kills an entire turn with your expensive fetch.

Atzocan Seer - Skip the returning Dinosaurs. You're a creature deck, and a big one at that. Just focus on constantly dropping big creatures and hitting your opponent, putting so much pressure on them that they don't have time to worry about strategy. Aggro decks don't really worry about their graveyard. As for the mana, you'd be far better served with Birds of Paradise or Sylvan Caryatid , or if you go non-budget then Bloom Tender .

Drover of the Mighty - Why do you care how big your mana dork is? You shouldn't be swinging with him anyway. Grab a Birds of Paradise or a Sylvan Caryatid instead.

Gigantosaurus - I'm honestly really not a fan of anything that costs 5 of the same color. This pretty much kills anything else you were planning on doing on your turn, which is absolutely not what you want to have happen. Sure it's a 10/10, but it's really not worth that downside, especially without trample. Look at Carnage Tyrant for a fantastic alternative.

Kinjalli's Sunwing - This draws unnecessary hate and really doesn't help your game out that much. You have a deck of giant dinosaurs. This shouldn't be an issue. If you really feel you need it then look into Authority of the Consuls or Urabrask the Hidden instead.

Runic Armasaur - Too specific and unreliable. There are better uses for the card slot.

Sakura-Tribe Elder - While a good card, your deck can't take full advantage of this and would be better off running land fetches like Tempt with Discovery , Nature's Lore , or Skyshroud Claim , all of which are better and come out untapped.

Samut, Voice of Dissent - Why in heaven's name are you running this? This card is awful? If it's for the haste then there are tons of better cards. Look at Fervor , Rhythm of the Wild , or Fires of Yavimaya . Even Urabrask the Hidden would be a better way to spend 5 mana. Is it for the untap effect? There are still much better options such as Seedborn Muse . This card burns 5 mana for no good reason. No. Just no.

Shalai, Voice of Plenty - Meh. I'd run Leyline of Sanctity or Privileged Position instead. Asceticism , Archetype of Endurance , and Sterling Grove are other good options. All are harder to hit and kill. It's nice but overall i'd run the alternatives instead.

Shifting Ceratops - Doesn't do enough. It's nice but not good enough overall.

Territorial Hammerskull - While not inherently bad, it's also just "meh". It's okay. I'd rather have cards that give your creatures trample and just march your dinosaurs through your opponents, and/or bigger and better creatures.

Thrashing Brontodon - This is redundant with Zacama, Primal Calamity and you'd be better served with instants like Krosan Grip or Force of Vigor .

Hull Breach - Force of Vigor is a better alternative to this that also has instant speed.

Jaya, Venerated Firemage - Why? This is a waste of a good slot. Run Warstorm Surge and get a far better effect than her. If you want more damage then run Dictate of the Twin Gods . She's really not worth it.

Samut, Tyrant Smasher - This card is awful. Run any, and I mean any haste enabler instead. Her negative is awful and her passive is better on any other card. Honestly, run Xenagos, God of Revels . He's amazing, gives haste, doubles a creature's power, and add's their power to their toughness.

Temple of the False God - I've taken this out of most, if not all, of my decks by now. It's not great honestly. It seems really good, but if you get it early game then it's a dead land that stares up into you and slowly seeps the joy out of your soul, and if you get it late game then it's just an extra mana that really doesn't matter to you.

Hey man I've been playing around more with this deck concept the last couple days & thought I'd share a few ideas I've come across:

If you want to go with a more combo-oriented route, Siren Stormtamer fits in really nicely, giving you more one-drops & protecting the combo pieces. Also, adding haste to the equation really helps make the combo faster & harder to stop since you can play Vannifar, pod into Timestream, and activate all in one turn, plus you can still go infinite even if Vannifar can't bring Timestream back on the turn it activates. Samut, Tyrant Smasher is the only real enabler in these colors, but it was actually pretty nutty when I was playtesting with it since it also makes the dorks pay for themselves.

For the less combo-oriented approach, I actually took your idea on Muldrotha in my deck but without Timestream, just because it's really good with the rest of the deck. One particular interaction that's pretty insane is with Gruesome Scourger . With Vannifar & Yarok out alongside just a couple dorks, you can play/tutor Scourger for a double-digit hit, then pod it into Muldrotha & play it again from the yard for a total of 20+ damage in 1-2 turns depending on your mana. I was already really liking Scourger as a finisher before adding in Muldrotha but the ability to quickly recur it makes it so much better. Also won a couple grindier playtest games thanks to Muldrotha + Plaguecrafter forcing a sac every turn.