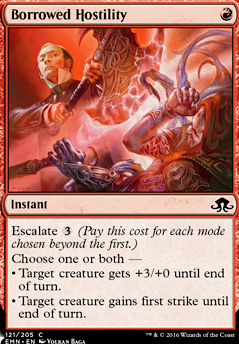 Escalate 3 (Pay this cost for each mode chosen beyond the first.)

Choose one or both -

One Punch! is all it takes
by Faaln 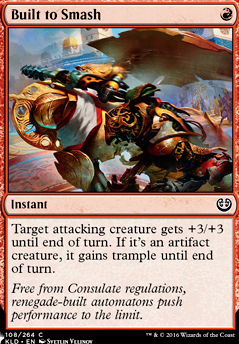 Feather, the Redeemed
by cynical_unit 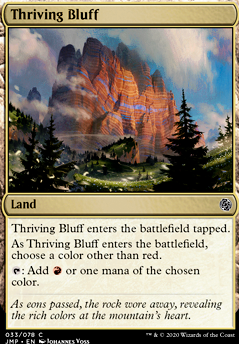 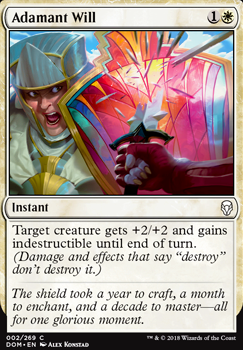 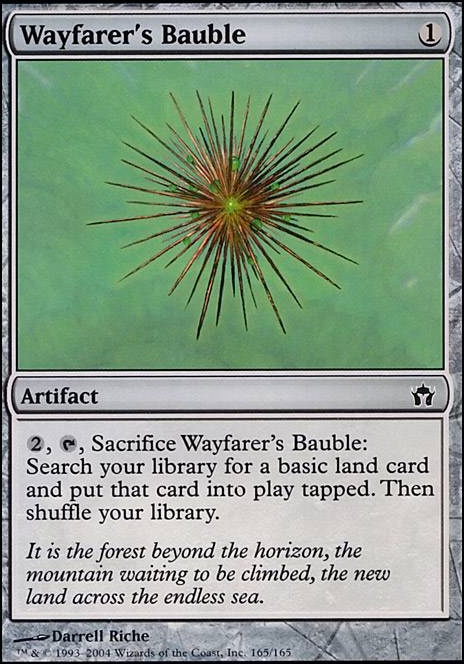 Feather and her tiny army
by natureboy95

Dragon Throne of Tarkir would certainly improve the robustness of the deck, and I do have several spells currently in there similar to Infuriate (such as Borrowed Hostility , Brute Force ,...), but for now I am tuning the deck for pure speed. But I think as soon as I get a couple games in with my play group they will catch on to what I'm doing and I will switch to a longer game build where Dragon Throne of Tarkir will be super handy!

This deck seems sweet! Looking through the list, I'm much more convinced that the aggro side works!

I don't like: Hero of Oxid Ridge (this card just seems bad) Tormod's Crypt , (there are better graveyard removal options) Journey to Nowhere and Oblivion Ring (these always get removed in my experience) Borrowed Hostility (I think I want my pump spells to either draw a card or be stronger than this)

you should really streamline your creatures a bit Deranged Whelp for example does virtually nothing for your deck. Reckless Bushwhacker only makes sence in a creature build an you are playing a creature spell deck. Conduit of Storms  Flip is too expensive and doesnt do enough for your deck.

Your sideboard is also pretty bad Rift Bolt can be a maindeck card but its not a sideboard card at all.

Why do you have Borrowed Hostility and Kari Zev in your sideboars at all? against which decks would you want t bring them in?

Thats a good observation xyr0s i think the deck will need to include mutiple elements if DanTheBear wants to keep it MONORED and cheap, but it can forsurely be more focused. I would say either go Burn&8whack with it or Burn&Prowess the second being my recommendation.

Burn elements of your deck:

Prowess elements of your deck:

8whack elements of your deck: (disclaimer i dont know much about 8whack so take this part with a grain of salt)

All players now have 21 health

Same with Borrowed Hostility and Fists of the Anvil

Did some major changes based off suggestions from the Pauper subreddit. Big thanks to Unstoppablebac0n, Slurmsmackenzie8, await, Semper_nemo13, and most of all mrogersj5 for pointing out a lot of the flaws and/or giving suggestions and tips or insight.

A lot of them pointed out that the draw was kind of arbitrary and hindered the deck quite a bit, so I removed the strictly draw cards like Gitaxian Probe and Faithless Looting. Also had a recommendation to remove the Lightning Bolts! or add one more for a playset. Ended up removing them as I doubt they'll do better than anything in the sideboard, plus it's just more space to add pump spells but I may add them back in. With that I also added in some Goblin Deathraiders for some extra pressure, plus trample helps get around chump blockers.

Something that I should have known better against, since I play more aggro decks than anything else, is the land count was too high. I went with mroger's suggestion for land count, removed a bunch of basics and two Evolving Wilds for some Bloodfell Caves and extra spells.

As for the spells themselves, I took out Borrowed Hostility for Cartouche of Zeal in both boards as per mroger's suggestion again. Ultimately the Cartouche does more for one mana than the Hostility. Dragon Mantle was also added because firebreathing and cantrip in an aura spell is a good idea. Outside of enchantments, playsets Mutagenic Growth and Temur Battle Rage were added. I'd been considering the Growths for a while because they're really good, but it took someone else suggesting it to push me to do it. Also I mentioned needing more evasion, and Battle Rage should be able to grant Trample more often than not and if not the double strike will help immensely.

As for sideboard, I took out pretty much all of the control initially in there for what is hopefully better control. Like in the MB, Cartouches for Hostility and I kept Nihil Spellbomb in as well. I added in Vampiric Link for Aggro matchups because lifelink. The rest of it I'm iffy on and is going to mostly depend on what I run into. Diabolic Edict was removed from MB to a 3 of in SB, but that's subject to change. Electrickery was suggested to me in place of Echoing Decay but that's another thing I'm iffy on. Again will depend on what I go against. Pyroblast is another card that might end up getting replaced, probably with more Pains if Counterspell is running rampant. Finally one Flaring Pain was added in, incase of Kami Pestilence lock or anything with Spore Frog.

I had Apostle's Blessing suggested, and I really want to put it in but it'll probably be dependent on if I need it. It more than likely will get added in when I get tired of targeted removal, but for now it's in the back of my mind.

Echoing Decay is something I touched up on, but it's going to depend on if some token strats come out of nowhere.

Again big thanks to all the help on Reddit and I'm super excited to get some testing done with the new build.