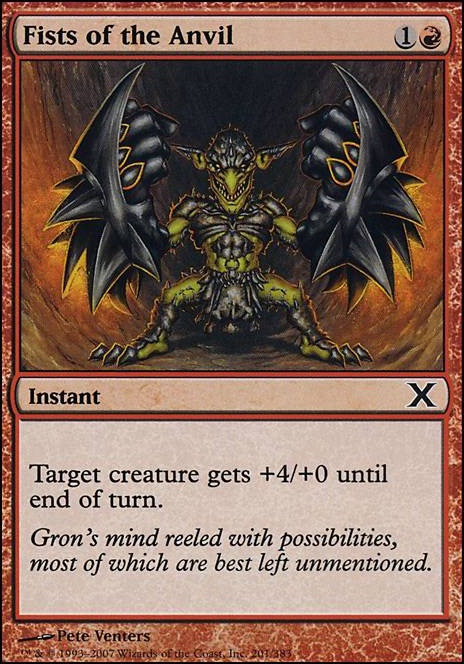 Fists of the Anvil

Target creature gets +4/+0 until end of turn. 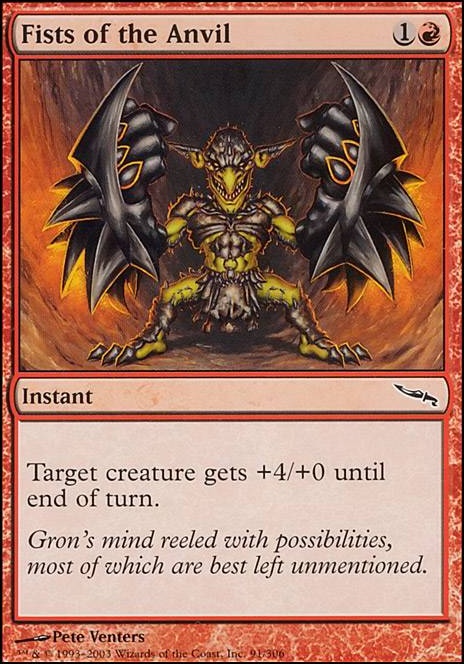 Fists of the Anvil Discussion

Gattison, the thing hanging from Glory Seeker is the scabbard of his sword, not his actual "sword."

I also forgot about Rakdos Keyrune, which again ahs suggestive flavor text, and there is also Fists of the Anvil which is entirely self-explanatory.

All players now have 21 health

Same with Borrowed Hostility and Fists of the Anvil

Quite the rebuild but, you have so many different cards at different mana-speed-levels that the deck won't perform very consistent

Shu Yun Does Most of the Work

Throw in Fists of the Anvil then it could be Shu Yun the fister!

Invigorated Rampage is just better than Fists of the Anvil

Muddle the Mixture will double as a tutor for your Isochron Scepter or Cyclonic Rift giving you more flexibility. Invigorated Rampage is a better Fists of the Anvil. Tolaria West with a Mana Crypt is a land that also ramps. (Also works with your Fabricate) Whir of Invention does the same with Mana Crypt but also searches Isochron Scepter helping with the soft lock if you can get a Counterspell effect under it. Sensei's Divining Top can be really strong with enough shuffle effects. Path to Exile and Swords to Plowshares are really low on the curve and don't hurt your game plan.

Best of luck and have fun!!!