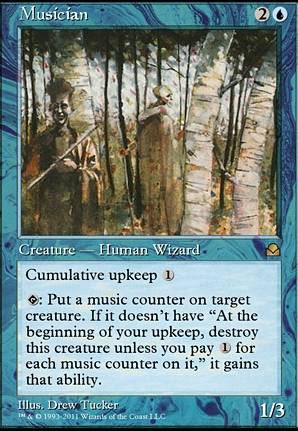 Tap: Put a music counter on target creature. If it doesn't have "At the beginning of your upkeep, destroy this creature unless you pay (1) for each music counter on it," it gains that ability.

Wait, what type of counter?! (IKORIA UPDATES)
by Poly_raptor

And I want to add in the others in the maybe board but Iâm not sure what for.

Every pirate crew needs their Musician

Mana Chains to kill an opponent's creature or make them waste their mana.

Musician to kill even more creatures.

Thanks! Those are some great suggestions, I'm especially interested in Razorfin Abolisher and it's synergy with a card I've always wanted to put in a deck: Musician

Our project is in the format commander, which is a singleton format. You can't have more than one of a single card except for basic lands.

ex> 5x Forest or Wastes, not 2x Musician, but only 1x Musician.