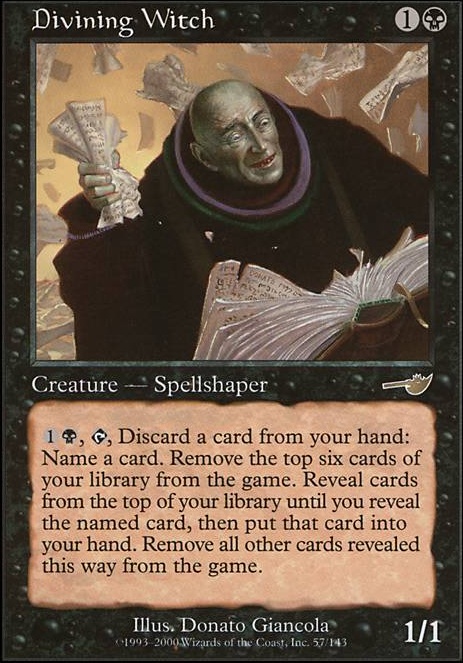 Thanks RagnarosTheFirelord! I also tried Omniscience as my 'only permanent', but it's so unstable and unreliable build. In Omniscience build, we have nothing to do when we exiled all our win-outlet with Illuna, Apex of Wishes mutate trigger. If you want to prevent that, you want that win-outlet in my hand. Yes, you gotta find that to win. In this build, you need to tutor only 1 card, which is Thassa's Oracle. but in Omniscience build, I don't think there's any card that '2-card combo's with Omniscience and win right away. Release the Ants needs another high cost card, which is techinically 3 card combo, Enter the Infinite? Nah. and so on. Then what? You need to tutor 2+ cards, which is hard on Temur color and will extremely slow down the deck. Also, What if the Omniscience got into my hand? The deck will get 1 more task, putting back Omniscience in the deck, While already having hard time finding for win-outlet anyways. So I just use Thassa's Oracle and use Illuna as Demonic Consultation, Tainted Pact, and Divining Witch effect.

I'm building my Dralnu deck around Divining Witch and Demonic Consultation. Pretty fun way to exile your entire library in one go, if you want a self-mill way to win with Laboratory Maniac or Jace, Wielder of Mysteries.

I rate Divining Witch at around 1000000 SHU. The higher mana cost (although it's split across turns, mitigating this factor slightly), broadcasting the effect and not necessarily being able to use it straight away - particularly post naus/necro/wheel, having to pitch a card and the effect being stapled to a fragile body are the downsides. The upside is that it's harder to counter the exile effect as it is an ability. This is relevant, but in my experience this often isn't the way that opponents interact with our combo. They're going to try to let you exile your deck and remove the labman effect if they can. It's certainly an interesting card!

What is your opinion on Divining Witch ? Is the nonbo with totem what takes her out of the deck?

drunksementhrowr take as much time as you need with replies! Real life takes priority

Labman is an extremely safe card for this deck specifically, because it aims to exploit creature based combos to fill the graveyard and the commander can act as a duplicate. That's why I preferred Lazav over another UB commander for this build. Being able to Dread Return your lab man after you copy it with Lazav adds in some serious redundancy to your win, which is a nice feeling with 3 hostile players staring you down. The move away from labman will simply need testing to see if it will work. This build with or without labman is correct either way, because I think you can make a strong case for or against it. The Doomsday brew I have (on private still sry lol) uses labman as well as Jace, Wielder of Mysteries with Demonic Consultation Tainted Pact and the unbelievably spicy Divining Witch for more direct A+B combos, and honestly they may have a place in this build.

I would definitely say this is an Ad Nauseam deck. With a single tutor in hand, it becomes a race for as a strong line to winning. Any combo piece + any tutor and you've guaranteed your winning line, and it lets you refill your hand with control and removal. Our curve is super low to fit the Ad Naus, which causes us to make sacrifices in other spots. We are primarily a layered Ad Naus list, with a value generator from the command zone. We can't guarantee advantage like Tymna the Weaver with 2-3 extra cards every turn, we don't have free tutors like Yisan, the Wanderer Bard , and we don't threaten wins with our commander alone like Najeela, the Blade-Blossom . What we DO have is both a combo enabler AND a combo finisher in the command zone. Ad Naus gives us a reachable goal at 5 mana to find a way to exploit the one card our deck always has available to play.

I really like the inclusion of the small sacrifice creatures. With infinite mana, they guarantee a win. They are pretty much the cards that replaced labman.

Cathartic adept is a spicy tech to shit on top-of-deck tutors. Vampiric Tutor Worldly Tutor Mystical Tutor Enlightened Tutor are played in almost every competitive deck that runs those colors. It hates on Sensei's Divining Top . Arguably Codex Shredder could be better here, as its online turn 1, but being a creature gives us more flexibility with Lazav. Pretty easy card to let go of for draw cards, especially if topdeck tutors aren't in your meta.

Dread Return loves Narcomoeba . The mill combos pretty much require a creature (unless you do Mesmeric + basalt monolith), so lazav + mill creature + narcomoeba would guarantee the flashback cost. Must have missed this when I removed Narcomoeba. Sorcery speed does make this a bummer, but we can always have Lazav in play before we flip so we can instant speed make a copy of labman if someone forces us to draw.

Scepter combo is extremely helpful against Cursed Totem and other creature based hate strategies. It gives us a discrete way to end the game, while being made from two cards with EXTREMELY high utility outside the winning combo, you can definitely value imprint something on Isochron early to help with favorable board state. I wouldn't recommend removing it. Any creature with the word "sacrifice" in your graveyard also means you will mill through your deck with Lazav to an outlet for a win.

I think one of the best ways to layer this deck further will be labman + pact lines. I would recommend giving those a serious consideration if you want to drop isochron + reversal. I also think adding more draw and removal is wise,

I enjoyed the anecdote! Glad to see my deck made it into the wild hahahaha! I look forward to your brewing and testing results!