When Deepglow Skate enters the battlefield, double the number of each kind of counter on any number of target permanents. 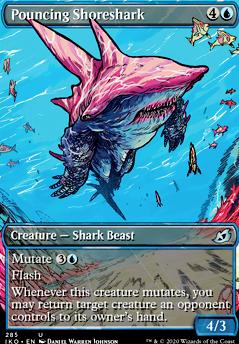 Bow Before the Queen
by Vulbrii

Have you considered Deepglow Skate ? I have found it a helpful way to potentially ultimate a Planeswalker who came down before Doubling Season .

Kaalia of the Vast // Optimized

DankMagicianD; They really are tough to utilize ever since MTG started coming out with Emblems and enablers like Doubling Season and Deepglow Skate . If nothing better at all, Serra the Benevolent is good for taking the heat off your Life Total for a bit, though if that Emblem hits, I'd say there's a good chance someone concedes the game.

Very interesting take on Atraxa you've got going on here. I do have some ideas on a direction you could take your deck, but what would be most helpful is a full deck description detailing vital card combinations, desired playstyle and most importantly turns you wish to threaten to win the game. There are plenty of resources on tappedout but a great start would be Epochalyptik's Do you want to write a primer?.

Now, as for your deck itself if you want +1/+1 counters then you have to make it a major theme or you'll find yourself in games where you'll have fairly little cohesion. I'd recommend staple cards like:

just to name a few. I'm not sure if the cards being Legendary is necessary or not - but i'm curious as to what your wincons are.

Are you wanting to make this compeitive, or just play casually? Academy Elite and Deepglow Skate aren't legal in modern, and you can make this deck a lot better if you want to play in tournaments, but if you're just trying to swing 12/12s at your friends at a kitchen table there's not a whole lot of point to making upgrades.

So iâve finally played some more multiplayer games. The deckâs working how i wanted too. The mana worked, thereâs enough mana sinks and enough ramp. Iâve had situations come up where i couldnât really proliferate anything while i had 2 contagion engines ready to go, but i think thatâs more of an anomaly. Keeping the planeswalkers alive has been tricky. As long as they provide their value a little bit and die though, the win can follow from dropping Liliana or one of the bigger walkers, immediately being able to ult and then win that way.

Tezzeret the Seeker is bonkers.

The Chain Veil is bonkers, pretty much as expected.

Lithoform Engine is fun, and if you have the mana can go nuts. Itâs unfortunate that most permanents youâd like to copy are legendary. Itâs been great on all fronts though, all uses were great.

Snuff Out i havenât ordered yet, but will probably go in

I havenât looked at the new set in detail but thereâs some interesting cards:

Any other ideas are very welcome, let me know!

Alright Pyrra and TriusMalarky, letâs settle down now. Youâre both entitled to opinions, itâs all good.

Instead letâs focus instead on what to add as additional pws, iâm sure you can both help me in that regard.

I also consider Deepglow Skate a great way to âwinâ. Any pws on board can pop their ult. Even better: if i drop Jace, Architect of Thought and skate i get to steal any wincons from my opponents as well.

Do you both agree to 37 for land count btw? I see a lot of decks with less but it seems greedy to me.

Also curious to your thoughts on the weaker proliferate cards in here. Spread the Sickness, Contentious Plan, Settle the Score etc are not amazing and rather slow.

Thanks :) Iâm not sure about the familiar, it only contributes colorless mana in a deck thatâs color-hungry, though it does so for every spell, which is nice. Iâm afraid it would usually just be a chumper or something

Let me know your thoughts :)

I know they aren't legendary, but Deepglow Skate and Doubling Season seem to be must-includes (especially the latter) in superfriends decks.