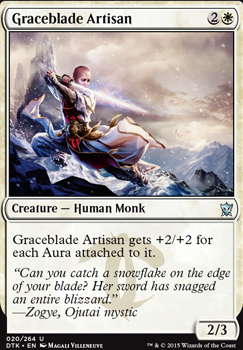 Graceblade Artisan gets +2/+2 for each Aura attached to it.

By the Grace of...
by HomebrewedDwarf

ScionsStillLive It's no Rabid Wombat , but there are a few modern creatures with that ability: Graceblade Artisan Aura Gnarlid Gatherer of Graces

Firemane Avenger is a good budget card, but doesn't really interact with your auras. Tiana, Ship's Caretaker is good too, but I don't know if you want to be playing four copies of a legendary 5-drop. You might want to sub out some of those for Favored Hoplite , Akroan Skyguard , or Graceblade Artisan .

This is a good start to an enchantment-based heroic deck. A few suggestions: (1) Hero of Iroas isn't doing much for you, since most of your auras are only one or two mana anyway - maybe sub in more Phalanx Leader or something like Graceblade Artisan ? (2) Auras put a bullseye on your creatures, so you might want to add in protective spells that also trigger heroic - Emerge Unscathed , Sheltering Light , etc. (3) If you really want to stick with the heroic idea, you might replace the artifacts and War Flare with something that can target multiple creatures - Cauldron Haze , Launch the Fleet , etc.

@DrkNinja, thanks for the suggestions. Most of them are a bit too expensive for me to seeking out, though. I do like Leyline of Anticipation, and thought about running Vernal Equinox as a psudeo-substitute for it (I don't think I have one right now), but the Equinox gives everyone the advantage, so am unsure of using it or not. I really like Daybreak Coronet for its casting cost, but I don't think I want to spend on that right now. I am replacing Graceblade Artisan with Ethereal Armor.

Thanks for the looks and the suggestions so far!