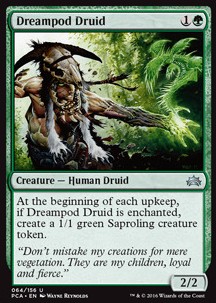 At the beginning of each upkeep, if Dreampod Druid is enchanted, put a 1/1 green Saproling creature token onto the battlefield.

Dreampod Druid occurrence in decks from the last year 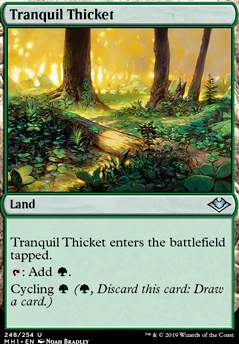 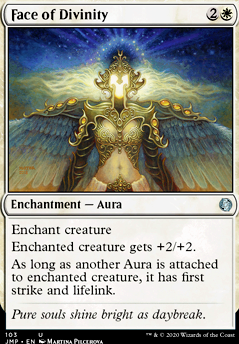 Also, you could go the Divine Visitation route with your commander, ajani's chosen, archon of sun's grace and Dreampod Druid

Not sure if you're still looking for some help but I saw a comment from you asking for recommendations on this deck. If you're still going with the idea of Voltron I'd personally cut cards like Cold-Eyed Selkie , Dreampod Druid , Giltspire Avenger , Nylea's Colossus , Qasali Pridemage , and Whitewater Naiads . Everything but the Druid and Colossus don't have synergy/good enough synergy with enchantments in my opinion and could be replaced with stronger enchantments or auras. Other creatures that I think could go are Kestia, the Cultivator and Kitsune Mystic . Kestia because with a voltron gameplan you aren't going to be going wide and you even have cards that make it so you only want to attack with one creature so 6 mana to Bestow just for +4/+4 and one cards a turn isn't worth it in my opinion. The Mystic while nice probably won't do much since you want just about everything on Tuvasa so moving auras around doesn't help you out.

For non-creature spells the board-wipes, Phyrexian Rebirth and Winds of Rath could be replaced with spot removal or counterspells but I'd say this is personal preference. Last cut I'd say would be Aura Shards because while it is a good card if you take the recommendations to cut down on creatures you probably won't trigger it very often so a strong aura or other enchantment will do more for you.

Other than that all I can say is you might want to try out Open the Vaults for if you get milled or Tuvasa dies while a ton of auras are on her. I also want to make it clear this is my opinion and I'm not some competitive Tuvasa player. These were just my ideas of how to make the deck into more of a voltron deck like the comment I saw said the deck was.

Yikes! There's a reason even the most permissive format only allows one copy of Sol Ring. In that case, you probably should run 4x as well, just to keep up.

Hypothetically, if I were adding black to this deck:

Well, first I would consider not having one of a bunch of different cards unless you're making a commander deck, if you cut down on the number of cards but add more of the ones you need, you can get a more reliable game. Since this is supposed to be a token deck you should definitely remove Lone Rider  Flip it's doing nothing for you here.

As far as the cards go, if your looking for budget token duplication you cant go wrong with Growing Ranks. But if your willing to spend a little more a much better option would be Parallel Lives or Primal Vigor.

I would replace Verdant Sun's Avatar with Soul Warden or Trostani, Selesnya's Voice and get rid of Ulvenwald Observer you can get "some" big tokens but not enough to really make him useful.

you should also consider focusing you're token generating more. right now the deck is kind of all over the place creating small numbers of random tokens. it would be more effective if you added cards like Verdant Embrace, Darien, King of Kjeldor or Dreampod Druid. (I personally like pairing Alpha Authority + Dreampod Druid to give him some extra protection.

However, if you want to keep the big creatures and have a deck more focused on power and toughness instead of massing tokens, you should consider Giant Adephage, Mycoloth, Verdant Force and my personal favorite, Worldspine Wurm as some more budget options.

Some other cards you might want to consider are Vitu-Ghazi Guildmage so that you can populate on command, and Voice of Resurgence if your willing to spend the money. that card is very good at deterring your opponent's from messing with your side of the board on your turn.

Hope this helps a little :)

Hey, nice deck! I noticed that you're running Dreampod Druid with only three auras in your deck. Are you able to get him producing reliably? I also noticed that you have only four swamps to turn on your Tainted Woods. If you have mana problems, that could be a good place to look. Good luck!