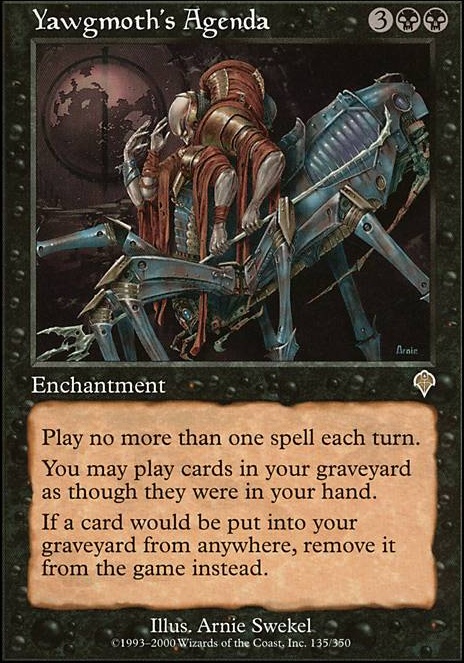 Play no more than one spell each turn.

You may play cards in your graveyard.

If a card would be put into your graveyard from anywhere, remove it from the game instead. 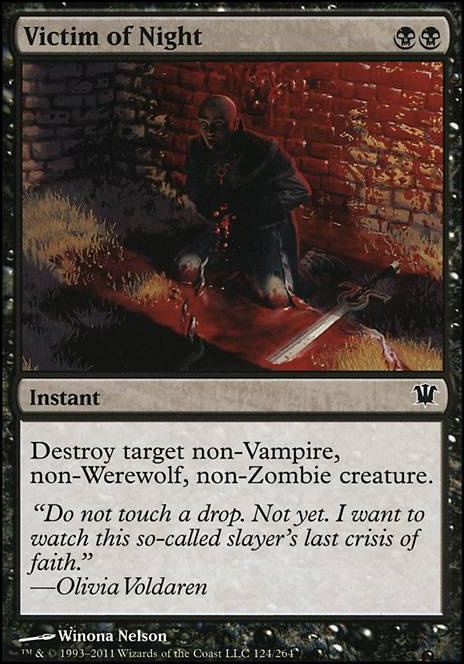 Only in death does duty end.
by Quicksilver This thing has really taken off... Working backward this time.

aholder7: Well, Colfenor's Plans and Yawgmoth's Agenda get around Knowledge Pool. Time to put Erayo's Essence back in. I might add mana additions in the next patch. How is your Avatar of Slaughter + Godsend idea dealing with Blazing Archon? Kataki, War's Wage would work very nicely, if not for Sigarda, Host of Herons (I think. I'll need to check the rules on that one). Curfew and a catalyst card does work.

TheRedGoat: What sort of specific parameters would you suggest? I'm open to ideas. And don't worry about getting annoyed; everybody's not going to react the same way to everything.

Zaueski: I hate to ask this of you, but could you please lay out your revised combo step by step? I'm pretty sure I've got it lined up, but I want to make sure before I review it. Rest in Peace does look promising, though.

zephramtripp: Sunken Hope does open up holes, and Eon Hub will close that one. Good call.

Vengeful_Khakis: Is there a story behind that name? Anyway, as mentioned with Kataki, War's Wage above, I believe Sigarda, Host of Herons prevents the sacrifice from Energy Flux. I want to confirm that first, though.

chaosumbreon87: Thanks for the help up there. Stabilizer is going in to prevent the Cycling effects.

Bovine073: Iona, Shield of Emeria + Painter's Servant makes another hard lock. Going to need to review for redundancy, but it'll go in.

Next patch and credits will come at some point tomorrow. If you posted while I was typing, I apologize, and I'll get to you next time. Thanks to everyone who's responded so far, and keep it up!

you can use Yawgmoth's Agenda or Colfenor's Plans to cast Rebuild.

Glad to see that you're human, Narej. Heh.

Still working on developing an optimized Daxos 2.0 list--and it's certainly proving to be more difficult than I first imagined. Null Profusion is definitely not a card that I am considering, however. There's a reason it costs five cents. I'd sooner play Yawgmoth's Agenda or Oath of Lim-Dul--and, no, I'm not going to play those two, either. It's a rough life, being a black enchantment that isn't Necropotence.

My card guesses, based on 'Lore'.

... there's a bunch more, but they are on the reserved list, like Yawgmoth's Will or Yawgmoth's Bargain, Serra's Sanctum... or have been in a FTC already, like Progenitus or Child of Alara

Most are self explanatory (if you know lore)... Near-Death Experience is add as pointing to the 'typical' way a Planeswalker spark ignites.