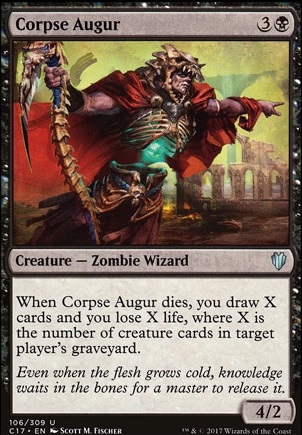 When Corpse Augur dies, you draw X cards and you lose X life, where X is the number of creature cards in target player's graveyard.

Corpse Augur occurrence in decks from the last year

Death and Taxes
by zaigul

Marchesa Brings Back the Dead
by Squirrll

Brother and Sister of the Dead V.2
by Andre00x

Also, are you on Corpse Augur or Undead Augur ?

I have considered Nim Deathmantle for a couple of reasons, namely for combos with anything that makes two creatures and Ashnod's Altar . It is still a work in progress and might make it in. At the time of this post, I cannot really afford new cards, due to personal reasons. Ravos was an add because it also buffs my small weenie creatures, so it sort of made sense. Whisper was added due to recurrable effects that can be used multiple times and not a one and done type of effect

Wurmcoil and Hangarback Walker are both from the previous build, you are correct. At the time of this post I replaced them with Sandsower and Ogre Slumlord . Whether or not they say it is hard to say, but the deck is still needing tweaking as I go

Vindictive Vampire I did consider, but ended up using Falkenrath, since it was more of a Blood Artist (in the sense that it triggers WHENEVER a creature dies, not just mine). Liliana is also another high $$$ card, and hasn't been purchased for that reason. It WAS considered, do not get me wrong. Sorin I don't see much reason to play, not really doing much. I think I'd rather play the ones that make tokens (Elspeth and Sorin) if I add planeswalkers to the deck

Yawgmoth, Thran Physician IS a card I'd love to get, and yet another $$$ card. Might try and trade for it, since I would honestly most likely play it over Liliana

Divine Visitation was removed as of this post, in place of Aetherworks Marvel . I literally forgot this was a card. Sure, we don't do allot with Energy counters, but we are constantly saccing our own things! Digging 6 cards deep and just casting it for free essentially is AMAZING! It means we might get out an instant speed removal or even a board wipe. It will also just help us to see more of the deck.

I'd like to get a DH for the deck. I feel like its "not needed" to make the deck playable, but it changes the power level very quickly. I might trade out one of the creature based sacs for Altar of Dementia, just to be able to actually mill people as another possible win con.

To address your concern about card draw: Corpse Augur (replaced today with Mentor of the Meek ), Grim Haruspex , Krav, the Unredeemed , Midnight Reaper , Tymna the Weaver , Night's Whisper , Painful Truths (replaced with Sign in Blood instead), Read the Bones , and Skullclamp make up the draw package. Most of them are "whenever X creature dies", but some of them also take on the properties of working with the Spirits we make to help us to connect (Tymna). Krav turns creatures into life gain and card advantage, and Skullclamp because...well, thats obvious. Bolas's Citadel . while not straight up card draw, can help really churn through the deck.

My biggest weakness I am having with the deck, is not having fodder, or not enough things to do with the sac. Like, I know I got enough sac outlets, cause I am sometimes flooded with them all. But it just feels like I dont have enough TO sac to get these triggers when I don't have my engine going

Something something Rose Pun

Ok, I have several suggestions for you.

First, you're very light on creatures for a deck with so many sac outlets that's focusing on Marchesa's creature recursion. Several of your instants and sorceries have better options on an etb. Your avg cmc on your creatures is also pretty high (3.88) and the deck does better with more synergy on board when Marchesa hits the field.

ETB abuse/Marchesa protection: Sage of Fables and Metallic Mimic . You don't need a lot of one tribe to abuse something like Kokusho, the Evening Star on each players turn instead of once per round.

Ok, I made a few changes to test stuff. Not sure if these changes are permanent so cuts were moved to my maybeboard.

Cuts: Corpse Augur - I love this guy but his ability isn't a 'may'. There's times I can't play this guy or having it out already gets in the way.

Sadistic Hypnotist - Most tentative cut here. I love that discard... it seals games. 2/2 for 5 mana and a human though.

Dimir House Guard - Another tentative cut. Tutors up 4 drops like Damnation or Sneak Attack or it's an evasive free sac outlet that protects itself.

Torment of Hailfire - I don't really go big mana here, this was a bad fit.

Adds: Dreadhorde Arcanist - I'm not sure that I run enough instants/sorceries here to make this work... we'll see.

Judith, the Scourge Diva - She seems promising to push the pace of aggro, shame she's a human and not a wizard though.

Jokulhaups - I feel like a dick ending games this way but this deck needs that option. Going back in and probably never coming out either.

Scourge of the Throne - This is my most tentative addition, I'll see if this guy actually sticks and puts in any work. Seems more like walking into counterspells or targeted removal willingly though.

I'm after opinions on these additions/cuts please.