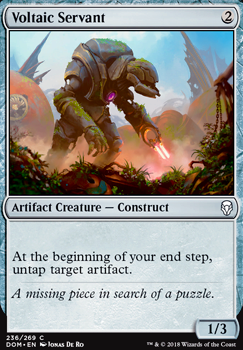 At the beginning of your end step, untap target artifact.

Voltaic Servant occurrence in decks from the last year 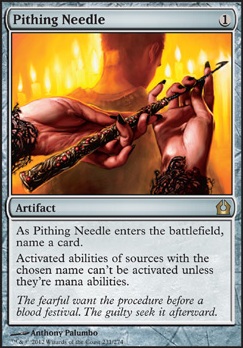 The Empire Strikes Back - $40 Budget Build
by DBCooper 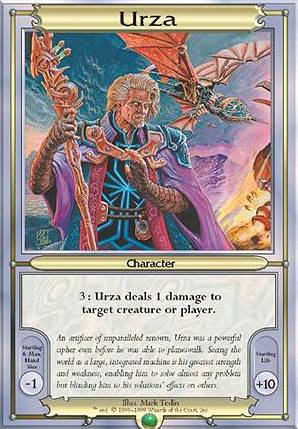 Voltaic Servant may be of some use to you.

I'd definitely find a spot for Mirage Mirror . Voltaic Servant would fit in nicely as well. Throw Seat of the Synod back in the main. Master Transmuter if it's within your budget. Sai, Master Thopterist should be an auto include. Saheeli's Artistry ? Metalwork Colossus ?

I'm not gonna tell you what to take out as that is hard for me to do on my own decks let alone someone else's, so I'll leave the deciding to you.

Since you're on Time Vault as a win-con I'd suggest playing the other 2 cmc transmute cards ( Shred Memory and Dimir Infiltrator ) since they find Time Vault if you need to win, and a couple of counter spells and removal spells if you need an answer. Also, Voltaic Servant is an untapper that can sometimes block, and is searchable with all your artifact tutors and your 2 cmc transmute cards.

Hey dude, liking these changes, the deck feels a lot more streamlined than before!

If youâre looking for additional suggestions, then these are my current thoughts:

1) you probably either want to make the deck more consistent, by running more 4-ofs instead of all the 1-and-2-ofs, or else allow it to work better under a more tool-boxy build, by including a playset of Whir of Invention . Iâm not sure how viable itâd be getting 3 blue for Whir though, so probably better to go for the first option. But in either case, youâre looking to more reliably get the pieces you need to see the game through. So more of the key cards like Walking Ballista , for example.

2) the tricky part of any deck - whittling it down to 60 cards. Anything above 60 will just make it less consistent and make your draws generally worse. Being able to confine your mainboard to 60 will make your deck stronger overall and having to critically evaluate cards down to that restriction makes for a better deckbuilder over time also.

3) some other cards to consider:

I'd advise to put in Voltaic Servant instead of Walking Atlas in main.

I think untapping Seer or Traxos will be useful more times than putting a land on the battlefield.