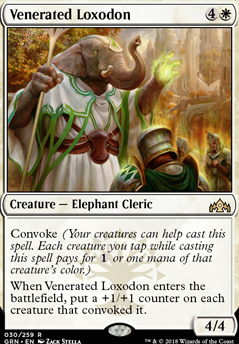 Convoke (Your creatures can help cast this spell. Each creature you tap while casting this spell pays for or one mana of that's creature's colours.)

When Venerated Loxodon enters the battlefield, put a +1/+1 counter on each creature that convoked it.

Venerated Loxodon is one of my favorite Convoke cards to use. He can be a fantastic Turn 3 play for 0 mana if your build is done right.

I run Convoke in my MTG Arena Speed Knight build to make use of tokens generated from Worthy Knight, but it looks like you've got ample token options here as well that he'd benefit.

Hey I decided to peek around at a couple other of your decks just to see what you had going on.

I've got a devastating Mardu Knight build myself (on MTG Arena online, not a physical deck) but it easily took me all the way up to Mythic ranking (top rank) back when it was Standard Legal. I haven't played it a ton since then, but a couple of things

1) Worthy Knight is extremely powerful when combined with an array of 1 and 2-mana Knights 2) If you go the route I did with Worthy Knight above, you might consider Convoke mechanics to really play off the quick & cheap creature generation. Conclave Tribunal ends up being a free-to-cast spell at least 75% of the time in my deck; and then in my build I also use Venerated Loxodon who similarly is often a zero-mana spell even on Turn 3, and he's a reliable way to beef up all your creatures across the board while still leaving yourself a strong blocker (the Loxodon himself).

It looks like you've got a lot of similar base cards apart from missing (in my opinion) Worthy Knight. Also, I'm not much a fan of Stormfist Crusader because as a general rule I don't like giving my opponent extra cards unless my deck has some mechanic for targeted discard as well. There's just too much risk in a card like that in my opinion; it opens up opponent to a lot more possibility for removal and other things that can throw a wrench in your plans.

Take a peek at my Mardu Knight build here if you want some further inspiration and a bit of a breakdown on what I think is the most efficient Knight build (though on MTGA I don't have access to cards like Knight Exemplar so I suppose that's something to consider as well).

Here it is in case you want to have a peek, sir: Mardu Speed Knights (MTG Arena Build)

VampDemigod - I could downshift Cleanse, Venerated Loxodon is the convoke boi, and good point on the Dryad! I also just finished Firebolt Mage (red) and Eclectic Engine (R/W).

Try Venerated Loxodon over Song of Freyalise, I run it in my MonoW Tokens deck and am quite satisfied with it.

Hey, I missed that you were already running Venerated Loxodon, my bad!

Still, 4x Intangible Virtue is a must-have for this deck in my opinion.