Whenever a creature you control becomes blocked, you may return it to its owner's hand.

Whenever one or more creature you control deal combat damage to a player, draw a card. 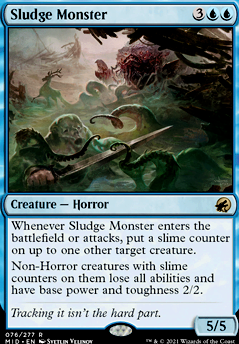 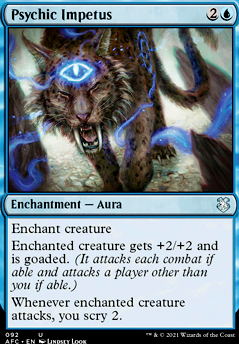 A Method to My Madness
by Metroplex_Grimlock

Nihiloor, Spymaster of Xanathar
by ValkiGodofLies 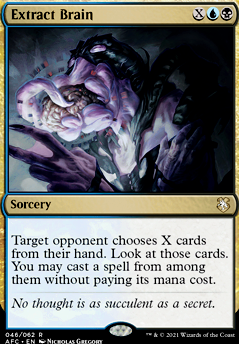 timelord I'd consider Diviner's Portent to work more like a better version of Blue Sun's Zenith in this deck. Since Grazilaxx, Illithid Scholar allows you to have such a massive hand size, I found it really doesn't matter what you roll on the d20 (the cards you have in hand + the number you roll is usually higher than 15. In my Grazilaxx deck (Grazilaxx, Card-Draw Fiend) Diviner's Portent works as Scry X, Draw X

Always great to see a fellow scholar! Allow me to recommend some cards that have really performed well for me, Toothy, Imaginary Friend is a great card that pairs really well with Grazilaxx, Illithid Scholar that you can bounce or grow with your card draw. I'd also recommend Teferi's Ageless Insight and Diviner's Portent as well.

So, I couldn't get my hands on Grazilaxx, Illithid Scholar of the 3 new horrors, but it is definitely the best of the 3 horrors. It not only helps us protect our creatures but it also is a body that gives card draw. Honestly, One of the better horrors to come out in a while.

As for Froghemoth it is a little slow but fits into Atraxa nicely. It fits with our theme, has synergy with Atraxa and has relevant keywords. I don't think it is an auto include but for a horror its decent. Also I like frogs, so im a sucker for this creature.

Mind Flayer honestly is fine but I don't think this is the deck for it. However, it is a fun card to play with. It is nice to take away fliers with so Atraxa has an easier time getting through though. Tapping our mediocre horror creatures to take people's commanders never feels bad. I am playing with this one right now but im not confident it will stay. It definitely has its niche though. If your playgroup is creature heavy maybe this will work better for you than me.

So I added Grazilaxx, Illithid Scholar for the same kind of effect as Cunning Evasion , because for this deck itâs important to try to put any effect I want in the deck on a creature instead of any other kind of permanent. That way it can potentially combo with ninjas, be tutored out by Higure, be played repeatedly, help me swing for damage. Our card advantage also comes from damage often, so my T2 play needs to be something that will feed that engine, rather than an enchantment that only really helps ninjas in combat.

Somehow I donât think Iâve actually EVER seen Myriad Landscape before, but it is a rather striahgtforward ramp card correct? With only one color mana to worry about and how cheap the card is, I might just put that in! Thanks!

The War Room would be cool for ALL of my EDH decks, which are all mono colored, but the budget is a little limiting. Hopefully one day. Anyways thanks for all the suggestions! KBK7101

I was wondering if you had considered any of the new Forgotten Realms cards yet, and what you might swap for them? Notably Krydle of Baldur's Gate , Silver Raven , and Grazilaxx, Illithid Scholar