So, yeah, this is my twelfth commander deck. I was planning to keep only ten active at the same time, but I was only lying to myself. xD

This is also the first deck that I made based on another player's list. Usually I either create it myself from scratch or upgrade a preconstructed deck. I watched Justin Parnell play it on Commander Vs. Randemonium and it looked so funny that I had to do it myself!

This is also the second mono deck that I created entirely based on a JOKE commander (and the other one is even better).

Anyway, if you haven't noticed already, this deck theme is to ping and untap, over and over again. 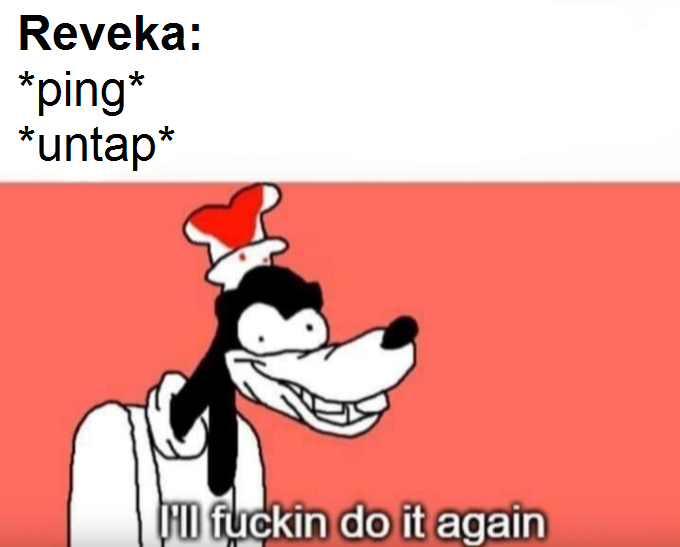 Some things make pinging quite good, like: Tandem Lookout and Curiosity for card draw, Willbreaker and Charisma for stealing creatures, Basilisk Collar and Gorgon's Head for creature removal, Sword of Kaldra and Dismiss into Dream for the indestructible creatures and finally Grafted Exoskeleton and Corrupted Conscience for the win.

There's plenty of untapping spells to support this, and a few aura-recursion spells like Iridescent Drake and Fumble to reuse some of the good stuff. Cards like Psionic Gift and Hermetic Study can turn any creature into a pinger, let's say Plague Myr is quite a good one!

If you're having trouble with hexproof, we're obviously running both Arcane Lighthouse and Detection Tower. But the real game plan is to combo Isochron Scepter with Dramatic Reversal + two mana worth of mana rocks and a pinger to end the match infinitely untapping.

By the way Reveka is a Wizard Dwarf, so there's enough wizards to use Azami, Lady of Scrolls and have another reason to untap your creatures! I've researched a lot of good lists with different subthemes and good ideas and ended up having 300 cards to work with, so I left out a lot of fun stuff, they're all on the maybeboard for you to take a look. Guess I can say the final list is my own work, after all.

If you like it, upvote and check out my other decks! :)