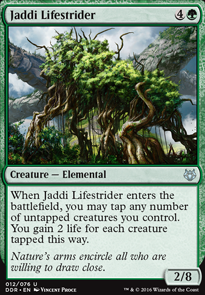 When Jaddi Lifestrider enters the battlefield, you may tap any number of untapped creatures you control. You gain 2 life for each creature tapped this way.

The snake is DUMMY THICC
by pwiggett 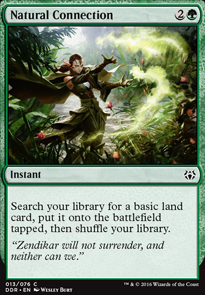 Horde of Notions
by Chad-Guy

Inspiration for all
by Hoobynobber7395 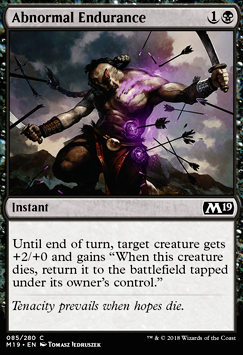 Doran, the Siege Tower
by Izgrimes96

Cool deck! No Seedborn Muse though? Also isn't Prophet of Kruphix banned? Is your playgroup cool with that? I'm a green specialist so I don't have much to suggest but it feels like Rishkar, Peema Renegade would be a good fit adding some ramp and some more ways to tap creatures. Oh Jaddi Lifestrider could also fit in here, the lifegain could bail you out in a pinch.

My Omnath is creature based and basicly element tribal but some cards IMO are a must with Omnath and one of them is Zendikar's Roil&Thromok the Insatiable&Liege of the Tangle for fun Also you could use Abundance to sift through junk. Parallel Lives for more Omnath tokens Grazing Gladehart for hp Rampaging Baloths&Jaddi Lifestrider just because. ENJOY

A ton of your cards are not standard legal, so you might want to change your decks format. Also, you might want to think about creating a common theme for your deck. Right now you have tons of options, lifegain, ramp, midrange, etc. But throwing them all together makes it a little difficult to create a deck that works well. Stick to one or two themes. After that you should try to gather multiple copies of the cards you think fit best. Having multiple copies helps with consistency in your deck.

I would recommend replacing your Wood Elves with a few Llanowar Elves and your Jaddi Lifestrider with an Essence Warden. She's not as cheap as you may want, but she's wonderful for creature heavy decks like this. I would also try to find a better replacement for Walker of the Grove

I would remove the following cards:

You don't have that many lifegain cards in your decklist, so you can't take full advantage of Rhox Faithmender.

Kami of Old Stone is too vanilla and can be replaced by something better. Strictly worse than Indomitable Ancients anyway.

Wall of Nets is usually going to kill things before it exiles them, so it's actually weaker in a deck with Doran.

Ayli, Eternal Pilgrim is good, but not good enough. She's better in a lifegain deck than in a deck with high-toughness creatures, even though she synergises somewhat.

Tasseled Dromedary is too vanilla and doesn't do enough; Treefolk Harbinger is the better card.

Jaddi Lifestrider weakens your boardstate in order to make its ability useful, and usually having giant blockers is better than some lifegain.

Tangle Angler is good, but the decklist isn't infect, which means it's less efficient here.

Grim Contest can be swapped out for one of the better removal spells.

Return to Dust is outclassed since you have access to Sylvan Reclamation, and Mortify and Putrefy also can destroy artifacts/enchantments.

Seasons Past is a tough pick to remove, but most of your creatures should be sticking around on the battlefield anyway.

You have a lot of great boardwipe tools that compliment your decklist, so I think Wrath of God can go.

Abzan Banner is the most expensive out of all your mana rocks; it can probably go.

I finally got a little spare cash to throw into this deck, more changes are to come in the future including a better mana base but the cuts helped remove cards that didn't quite live up to their expectations and the additions give much more consistency to the deck.

+Karlov of the Ghost Council

-Retribution of the Meek