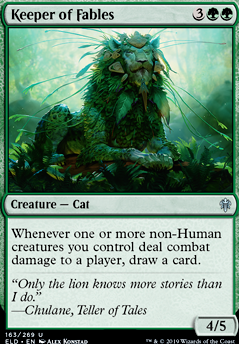 Mortals of Myth
by Morpheus_TechnoPagan 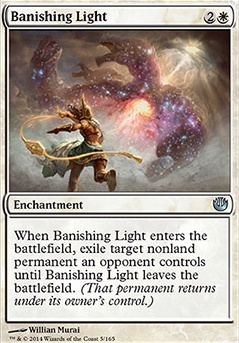 Kemba, her arms wide.
by motts33

You need more mountains to get the most out of Wild Nacatl, having just 1 means you'll rarely ever see it in game, and using Evolving Wilds to grab it seems really wasteful. I would cut the Nacatls and the Mountains for more consistent mana. You have way too many lands in general, in a 60 card deck you really don't need more than 24 unless you're playing that really requires a lot of lands, like a ramp deck. Savannah Lions is worth being a 4 of, it's a really strong creature for one mana. Jazal Goldmane is a good 1 off to pump the entire team into a big push. Jungle Lion is Savannah Lions but in green, which is good for the aggressive game plan you're using. I'm not really a fan of Jareth or Phantom Nishoba since you'll likely either win or be close to it by the time you get to 6-7 mana, they can be cut for cards of lower mana costs that help you attack with more cheap cards, like Oreskos Swiftclaw This is a pretty solid list for a first couple attempts, better than any of my early lists.

This is a cool and interesting tempo deck. I am unsure that you will run into enough artifact and enchantments to have to maindeck Naturalize and Safewright Quest seems a little slow with 4 Commune with the Gods already maindecked.

I think the major opportunity is that this is a deck that looks to win with creatures attacking, and only has 13 to attack with. This might be a fun deck to try things like: Hopeful EidolonYoung WolfOreskos Swiftclaw

id recommend build all decks to 60 cards, also id say try not to run so many 1 ofs, if this was made from cards you had lying around its fine but if your trying to give it maximum potential and consistency run 4x if you can. when cutting cards get rid of the cards that dont help the strat of the deck. id be looking at Oreskos Swiftclaw and Dromoka Warrior. they are worriors and 3/1 for 2 is on par but if you could get you hands on another 3x Brutal Hordechief that would make the deck stronger and more consistant

this is a deck i made using random cards i have (casual play with mates) Zulaport Cutthroat is the main thing of the deck and i only have 2 so to shell this problem i put it in a agro deck with lots of low drop creatures and draw power, the only card that doesnt follow the nature of the deck is Glorybringer the reason he is in there is as a secondary win condition if playing small things and going wide isnt working. with your Oreskos Swiftclaw and Dromoka Warrior i feel they are more of just a space filler that could be better used card slots.

and im assuming that you are using the best removal cards that you could get your hands on because Reave Soul is actually a bad card i can see it with some use if you had a card that reduced power like Meishin, the Mind Cage but you have nothing of the likes.

one last thing is that you might want to consider adding some form of "draw power" pretty much any card that reads "draw a card" is good for you deck or "draw 2" or "whenever x happens draw a card" is best.

hope my rambling didnt bore you, if you have any questions feel free at ask :)

Alright, alright, we are gonna need to grease our arms for this one. As of right now your deck seems to have an issue with its goal - a conflict of interests. You have plenty of cards that produce tokens, which is fine, but you also are running Massive Raid and Dogpile. Which would be fine, but you are running Collateral Damage which reduces the effectiveness of those cards. So my first word of advice would be to remove Dogpile - Might as well replace it with the ultimately better relative: Lightning Bolt.

Alright the culprit in this situation is Burn at the Stake while it is arguably better, casting it is quite difficult with the triple red. I think you should increase the Dogpile count, and reduce the Massive Raid count. I'd consider ridding yourself of Burn at the Stake altogether.

Now the creatures and cards that enable this strategy, are frankly terrible. Both Blade of the Sixth Pride and Oreskos Swiftclaw are horrible, and they do nothing to help further the strategy. Replace them with Lingering Souls, Increasing Devotion, Hangarback Walker, Secure the Wastes, and Mentor of the Meek. All of the cards listed are better than the two I have a problem with, however I'd also recommend getting rid of Healer of the Pride or Thraben Doomsayer. Lifegain just further prevents an inevitable death, so including it will just prolong the time it takes you to lose. And Thraben is just slow.

Since you are in white you could run some of white's strongest removal spells: Path to Exile or Swords to Plowshares.

As for the land base, if you do decide to run Lingering Souls I recommend you run some kind of black to make use of the flashback.