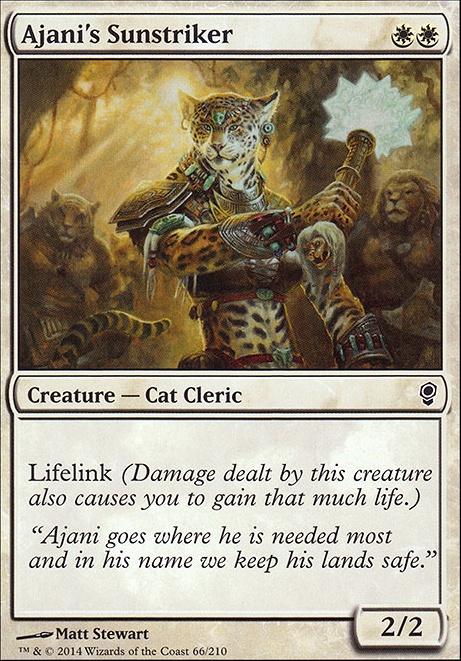 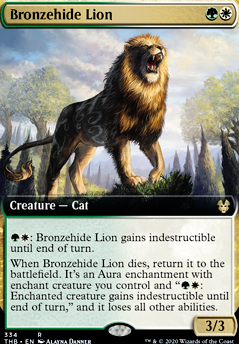 The Earth is Ageless
by Gambyte 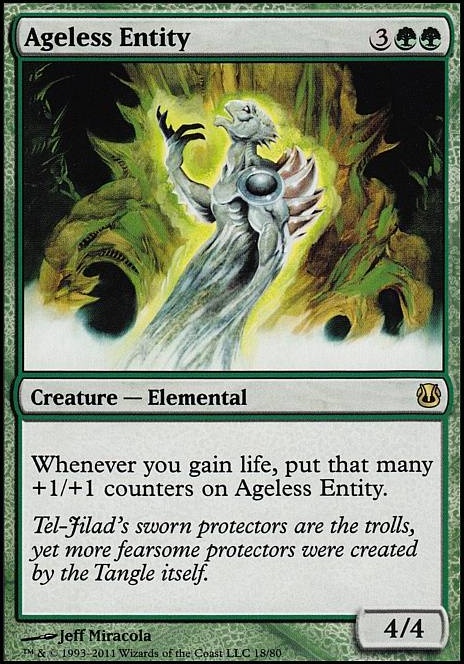 Thanks Texan_Reverend! I had considered the upgrade of Brave the Elements , but hadn't thought about the division of the damage type. I will probably change them for Ajani's Sunstriker , as lifegain has never hurt anyone (until a wild False Cure appears).

I think Brave the Elements would be a significant upgrade to Gods Willing by trading the scry for applying the same effect to your entire board for greater impact. This can save them from sweeper effects, allow you to block safely, or make your creatures unblockable by the chosen color. Also, the Lost Leonin splits your deck's attack focus between regular damage and poison counters. If you want to keep it at 2 CMC or less, great alternatives could be Ajani's Sunstriker , Ajani's Pridemate , or even Metallic Mimic

Good work on the deck! This is already remarkably close to an old competitive modern deck, Soul Sisters. I think leaning into that a bit more would be a good way to power this up.

Let's start with the elephant in the room though. Daybreak Coronet has to go. It will only enchant creatures that already have another aura, but you have no other auras, so it does literal nothing here. I'd probably replace it with Spectral Procession. Getting three flying tokens is already good, but because of your cards like Soul Warden this will also turbo charge your creatures that grow when you gain life.

Speaking of, you should probably have more of those effects. Dropping Ajani's Mantra and Ajani's Sunstriker for Soul's Attendant and Auriok Champion will give you more frequent triggers, while also triggering off of one another.

Hey, man. Finally got the chance to look at it, thanks for linking it to me. Here are my suggestions:

There are a few really good upgrades you can make on the cheap. I'd say almost all the upgrades below are strictly better except Divine Visitation which is new to MtG, since it's a part of the new Guilds of Ravnica block. Trading out Sigil is just personal preference.

You've got too many enchantments eating up space for things that are more important like your land base. White has a really hard time ramping and tends to be the most costly color, so you want to draw as much of it as possible. I'd aim for 35 lands minimum, but 36 is probably preferable. Every land counts.

Six of the eight add-ins below are lands. You need a hard to deal with board wipe like Wrath of God and I'm really surprised you didn't immediately go for Riot Control, since it's a table staple. If you really don't want it, I'd go straight for the Path to Exile.

Mono-colors can get some crazy mana numbers going, but white has terrible ramp, cards like Land Tax and Thawing Glaciers will help you get lands on the board, while the multiplier artifacts will keep your mana plentiful.

If you don't know what to cut for PTE, I would drop 1x Healer of the Pride (a bit too slow for modern), 1x Ajani's Sunstriker (a 2 mana 2/2 lifelinker is just average) and 1-2x White Sun's Zenith (4x is way to much and it is also a slow card that sees most play in control or orzhov token builds, while soul sisters is basically an aggro deck that needs to be fast)

Ugh, to do the rest, I am just going to drop this text: