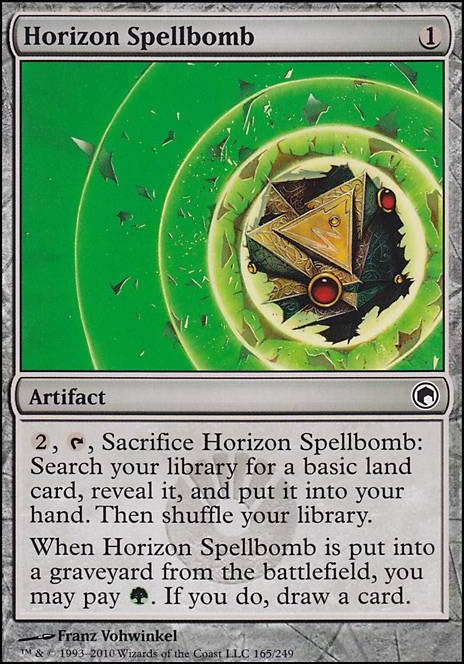 {{2}}, Tap, Sacrifice Horizon Spellbomb: Search your library for a basic land card, reveal it, and put it into your hand. Then shuffle your library.

When Horizon Spellbomb is put into a graveyard from the battlefield, you may pay {{G}}. If you do, draw a card.

Twist35 I hadn't looked at this deck since Vegas last year, but the best option is probably Horizon Spellbomb, considering it can draw a card, as well as Gateway Plaza. You could also go up to two of each non-island basic, but that's probably too much.

Yeah, I thought about that a little too. It seems tempting, right? I mean, Evolution Charm has a slot, and that card's generally a forest with extra steps, so why not Traverse? One could easily just go -1 Forest +1 Traverse the Ulvenwald and it'd probably be worth it, right?

It isn't really, unfortunately. The problem is that there aren't that many ways to get Delirium either before or during the combo turn. There are only three relevant artifacts (Horizon Spellbomb, Armillary Sphere, and Wild-Field Scarecrow) and nowhere near enough other ways to dump cards (unless they start printing a lot more cycling lands). I have a hard enough time getting Spell Mastery for Nissa's Pilgrimage, and at least that card has a better fail case.

Evolution Charm earns its spot by being a regrowth for whatever casualty you had during the early turns. Sometimes you just need to play out an Eternal Witness for example, or getting back Wild-Field Scarecrow to get an extra land. Traverse, unfortunately, doesn't do any of that.

Traveler's Amulet and Wanderer's Twig are very good in this format, I do use them frequently in $50 budget decks (example 2C Mardu Alesha, Boros' Crust.

Whip of Erebos is very important in this format, often because combos are less prevalent, and often you will be killed through having your life reduced to 0. Lifelink is powerful in $50 budget commander league. Also, it's an artifact so can avoid removal, plus it allows me to recur creatures like Fleshbag Marauder/Slum Reaper/Merciless Executioner/etc that I can't recur, to trigger my Glissa, the Traitor ability to return my artifacts. Sangromancer to can gain quite a bit of life in an Barter in Blood/Mutilate/Etc type situation.

I did opt-in things like Golgari Cluestone/Horizon Spellbomb/Etc because of draw or LTB triggers as well (on stuff like Mycosynth Wellspring for example. I thought I needed more tutors Razaketh's Rite/Diabolic Tutor but you might be right where I need more ramp now. I'll try and get some reps in, I have 4 $50 commanders now, so i usually randomly choose, but I can select, last season, and this season Glissa, the Traitor runs a 33% win ratio (in 4-player pods), so it is fairly consistent.

Graveborn Muse recently added has been doing tons of work for me, giving Bone Picker a chance now, really like the deathtouch.

I was thinking, perhaps the familiars should be put in their respective 3-color shards? Or both sections.

Horizon Spellbomb would be good for draw and ramp

Aren't you a little worried about the early game? It seems that the average creature cost is 6+ and only 1 mana rock and 3 ramp spells. I feel you will have a hard time staying alive to cast your cards against an aggressive field.