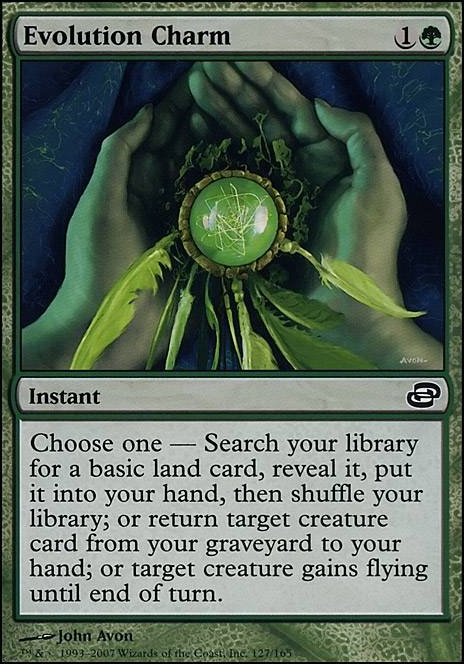 Evolution Charm occurrence in decks from the last year 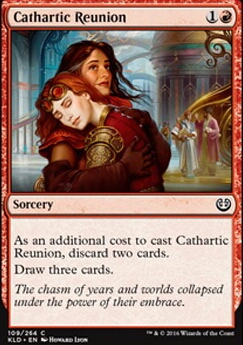 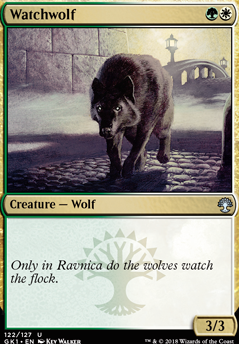 The Real Shroom Shady
by Lt-Waffles

For some more card advantage I would consider adding Beast Whisperer instead of Colossal Majesty if the plus in money isnÂ´t the problem and something Fog-like if everything regarding speed isnÂ´t going as it should. Evolution Charm is a good Jack-Of-All-Trades-Card in my opinion and can be a surprise if your biggest heavy hitter suddenly hits in the air.

Lions and Nacatls and Apes, Oh My!

Thanks for the suggestions Icbrgr! I have run Rancor in the past and found it very effective. I stopped using it because my play group started to bring more creature removal. I decided to switch to faster sources of damage like Lightning Helix to be able to sneak in damage even without creatures on the field.

Evolution Charm seems like it would bring more versatility to the build. I may give it a try and would like to hear about your results on the card!

Well how can I not like my own deck lol. Somthing I am considering is Evolution Charm over Into the North ... the utility of mana/color fixing as well as evasion and creature resurrection is playtesting pretty well for me.

Lions and Nacatls and Apes, Oh My!

I'm a huge advocate for Rancor in small zoo builds... its not very creative but it's a must have for 2/3 creatures to remain relevant as the game goes on. Somthing else I am toying with is Evolution Charm ... mana fixing as needed, resurrection of a creature or evasion!

got my hands on one of the mythic war of the sparks boxes...gonna slot in Ugin, the Spirit Dragon and maybe jtms.

sorry for the delay in primer update. I have lost the ability to manipulate tappedout at work anymore. will play around with slots and the primer tomorrow

Hey, why do you feel you need to play all low mana cards? More low mana cards than anything else is good deck building, but with Trostani you can take real advantage of some high mana creatures.

Armada Wurm for instance can gain you 10 life and puts a 5/5 Wurm token with trample on the battlefield to populate. It's 10 trampling power on the battlefield for six mana. Opponents need an answer for this. It's really the only budget big creature you need because of it's great interaction with Trostani.

Wayfaring Temple grows as you play more creatures and if he connects for combat damage to a player then you populate. Advent of the Wurm is instant 5/5 Wurm with trample good with populate. Trostani Discordant is an anthem for your other creatures and she creates two 2/2 Solider tokens with lifelink to populate. If any of your opponents steal your creatures, gain control of them, then she gives you back control of your creatures.

When casting a lot of low mana creatures then Beast Whisperer is good repeatable draw. Lifecrafter's Bestiary is other repeatable draw when you cast creatures and scry 1 at upkeep is very helpful. Dawn of Hope is repeatable draw when you gain life for the cost of mana. With Trosanti on the battlefield adding an extra two mana to creatures who ETB lets you draw a card. If life gain is what you're after Soul Warden , Essence Warden , Soul's Attendant are great because they care about any creature that ETB including all your opponents creatures. These cards are good with Dawn of Hope for draw.

If combat with weenie creatures is what you want to do then consider Dauntless Escort , Selfless Spirit , Dauntless Bodyguard and Unbreakable Formation ? These cards can protect your creatures from most board wipes and combat. Rancor is good with little creatures and trample for Phyrexian Processor tokens. Spirit Loop is a upgrade for Lifelink. These auras are nice because when the creature enchanted with one of them dies/exiled or an opponent destroys the aura then the aura goes back to your hand.

Swords to Plowshares , Selesnya Charm , Evolution Charm , Dawn Charm are low mana instants that are good in Commander. Charms give you options and when you can realistically only cast a card once then options are excellent.