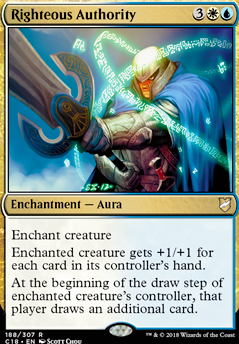 Enchanted creature gets +1/+1 for each card in its controller's hand.

At the beginning of the draw step of the enchanted creature's controller, that player draws an additional card. 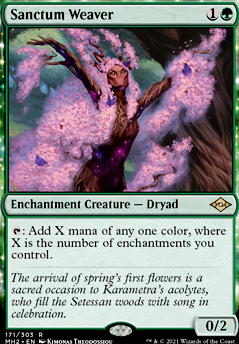 Estrid, the Masked - Aura
by Gbickel

Guerric fair. It's how I play her, but it's tuned a bit more to be good in more tuned EDH or even cEDH(although I need to work on it a bit more before it's fully cEDH) and be a sort of farm control deck.

Also, I really like Righteous Authority . Like, it's actually stupidly good. See, cEDH and more tuned EDH have less of a focus on creatures so you can get the occasional win by slapping people with a big thing because interaction is more heavily focused on counterspells and such. In my list, my win con is slapping, which works hilariously well(at least, so far. I don't get to play much) and Authority is great because it easily gives Tuvasa +5/+5 or more -- often on top of the fact that Tuvasa is 5/5 or so anyways. Also, having lots of cards is good when you want to hold things like Spell Pierce or Angel's Grace up to prevent people from comboing off.

Righteous Authority for sure.

One of my favorite flyers of all time is Mindshrieker, capable of causing massive damage one you get enough mana to force 3 or 4 mills.

With any auratron commander, adding the combo of Sovereigns of Lost Alara with Eldrazi Conscription is a consideration, especially since you already have Bruna in the deck.

Some more auras that may be useful: Face of Divinity, Shield of the Oversoul, Righteous Authority, Curious Obsession, Empyrial Armor

Hey! Stumbled upon your deck when i was building my own bantchantments from the precon. I noticed right away your mana base looks like it could be sped up a lit by removing a bunch of those pesky "comes in tapped" lands for some shocks or pain lands. also, you do look creature heavy for this type of build so maybe some more constellation triggers on a few enchantment/creature types like Eidolon of Blossoms . Also, watch out for trap cards like Righteous Authority , it might just be a personal bias but the mana it costs isnt worth the extra card per turn and there are nicer options for card draw like any of the enchantresses for synergy or even just a Kumena's Awakening

Allay (for the recast ability)

Aether Tunnel to make your boss unblockable like Aqueous Form