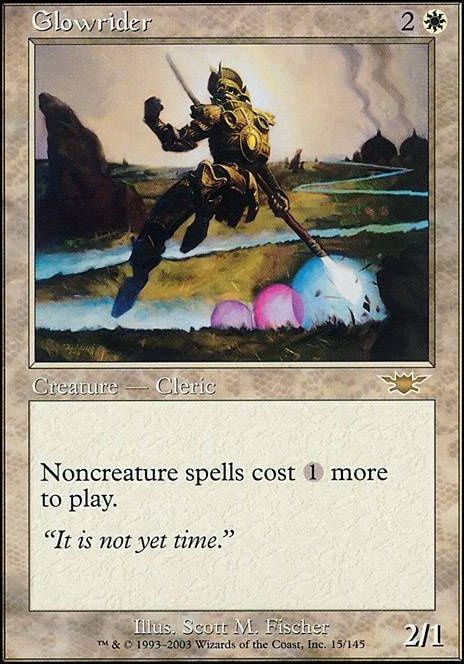 I hate commander
by honeybeeyeet

sergiodelrio: This is giving me a headache for figuring out ways to make this cost more. Damping Sphere , Geist-Fueled Scarecrow , Glowrider , Lodestone Golem , Sphere of Resistance , Thalia, Guardian of Thraben , Thorn of Amethyst , Vryn Wingmare are what I found. Seems interesting.

Youâd be surprised how easy it is to disrupt the most âpowerfulâ cEDH game plans. (Or maybe you wouldnât be!) For instance, something as simple as Glowrider puts a stop to most cEDH combos. They only have so many Force of Wills, but we have and endless supply of these little [email protected] :)

I know those cEDH folks think theyâre playing a higher order game and so forth... yawns Itâs really just about money and elitism.

Iâll tell you with some confidence that my $75 Talrand cEDH deck also crushes in 1v1 cEDH, like itâs not even funny. Trollinâ with Force Spike and a gaggle of bad, bad cards :)

Itâs a bit weak to aggression in multiplayer though. Most cEDH tourneys are 1v1.

Buy the Derevi deck tho, seriously. Itâs only $100. If you play it at a casual table youâll feel like a jerk.

Much love and thanks for all your comments!

Oof_Magic on A Quest for Power: Unrestricting â¦