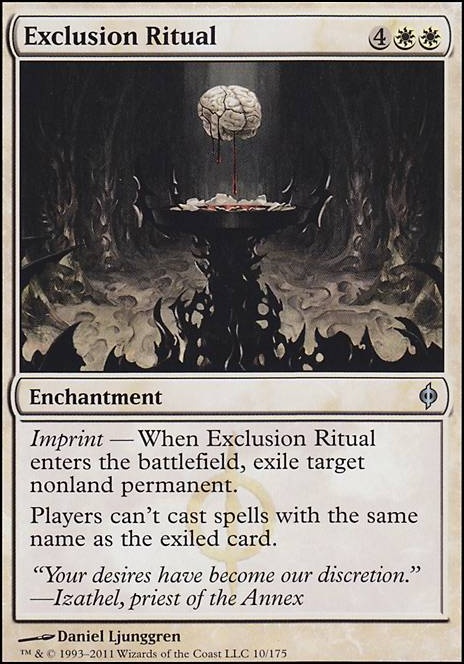 Brago, the Banisher $50 EDH
by Spirits

A House of Cards
by adboyer

Heliod, God of the Sun EDH Deck by Keondo

Iâve been thinking of building a Heliod deck and have a ton of questions/thoughts if you donât mind me asking.

Have you thought about Archon of Sun's Grace? It gives you an extra token for each Heliod activation. A team of vigilant, lifelink fliers has a lot of offensive/defensive potential.

Is Mentor of the Meek an option here or is needing the mana on etb too taxing? It looks like you would have plenty of ways to trigger it.

Felidar Guardian combos with Skybind to loop an enchantment every turn. You donât really have any payoffs for it at the moment but it seems great with Act of Authority, Elspeth Conquers Death or Exclusion Ritual to get rid of something permanently.

Moon-Blessed Cleric could be great here too. Itâs a repeatable tutor effect with Skybind and synergises well with Sun Titan and Recruiter.

Want to play a game?

I ran a couple goldfishing playtests of your deck (i.e. running it by itself with no opponent trying to hinder you) to demonstrate how quickly you could expect to cast one of your Eldrazi. The results were on turns: 9 (issues with lands entering tapped due to the lack of basic land types slowing down playing creature cards); 18 (hit sufficient mana on turn 11, but didn't draw into an Eldrazi); turn 8 (no plays until turn 4); turn 9.

That's far too slow for Modern, particularly given your lack of useful interaction.

In the interest of helping you as a deckbuilder, here is some generic advice:

This site has some rather helpful analytical tools, such as a handy dandy little chart showing how much your spells cost. This shows your highest concentration of spells are cost 4 mana, which is a high place for your curve to be centered.

Since your last iteration of this deck, you have added more removal, but most of the removal is fairly lackluster. Here are cards that don't work for you:

The one strong piece of removal you have is Assassin's Trophy - it's a strong card that hits any permanent you might need to kill. Other strong piece of removal in Modern include Path to Exile , Lightning Bolt , Fatal Push , and Dismember . When choosing your removal package, you want to (a) focus removing creatures and (b) focus on cards with a low converted mana cost.

For ramp, you don't want to focus on having a bunch of lands and ways to cheat them into play. Instead, consider ramp creatures like Llanowar Elves . Simian Spirit Guide is also a pretty strong answer if you are in red, as it gives a free influx of mana.

Normally Modern decks have 24 or fewer lands, depending on the curve of your deck. 30 is far too many.

Remember that, just as important as ramping into the spells you need is the ability to actually cast spells when you need them. To that end, a four colour deck is pretty hard to pull off without a bunch of expensive fetch and shock lands. Seeing as you do not want to run Tron and want to stick to other methods of ramp, your best option is going to be a two-colour deck with Green for ramp and another colour (white would be my choice) for removal.

Hopefully some of that helps show some of the issues you're having, and provides some direction on how you can make some improvements.

Take out Exclusion Ritual , it doesn't work on commanders.

If that's the case, then I would start with Sphere of Safety and adding more enchantments to bolster the pillow-fort plan. Blind Obedience , Authority of the Consuls , Darksteel Mutation , Grasp of Fate , Citadel Siege , Prison Term , Curse of Vitality , Martyr's Bond , Gideon's Intervention , Oath of Lieges , Martial Law , are Exclusion Ritual are all good. Norn's Annex is a "yes," from me, dawg. Baird, Steward of Argive , Orzhov Advokist , Peacekeeper , Windborn Muse , and Glacial Chasm , might be decent, as well.

Putting in the other Elspeths and maybe a Gideon or two, along with Arena Rector will help set up your end game for after you wrath. Fumigate would also be a big boon.

You'll probably want to go up to at least 37, if not 38 lands, since it sounds like you don't want to be missing land drops.

10000 years ago I played a Brago deck which naturally had some cards in it, that would fit Aminatou, the Fateshifter very well: Reality Acid, Ancestral Knowledge kind of interacts with her first and her second ability, Tezzeret the Seeker to use his -x multiple times, Thought Prison and Exclusion Ritual are pretty cool, Palinchron or Treachery, Scrivener, Gilded Drake.

Exclusion Ritual seems way too specific for EDH, I wouldn't recommend it. Plus that mana cost is bonkers. In fact, all those enchantment (Nevermore, Oblivion Ring) are probably not ideal for EDH. You'd be better off replacing them with specific removal similar to Path to Exile, for example Anguished Unmaking.

You may want to consider swapping Augury Owl with Baleful Strix.

Also, since you have Sharum, you would benefit from Sculpting Steel and Phyrexian Metamorph if you want to play combos. These, in combination with Altar of the Brood or Bitter Ordeal, will result in a mill infinite combo, if that's something you want to use.

You could also consider replacing Akroma's Vengeance with Hour of Revelation as the effects are similar, the costs are the samebut there's a chance you might only have to pay 3 for Hour as opposed to Akroma's.

Lastly, if you want to get the most out of Sen Triplet's effects, you really need Chromatic Lantern or similar ways to cast mana that isn't in your colours. Looks like a fun deck overall though, I really love Sen Triplets.