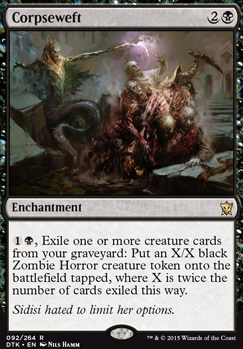 , Exile one or more creature cards from your graveyard: Put an X/X black Zombie Horror creature token onto the battlefield tapped, where X is twice the number of cards exiled this way.

The Art of Necromancy
by ShadowsofChaos 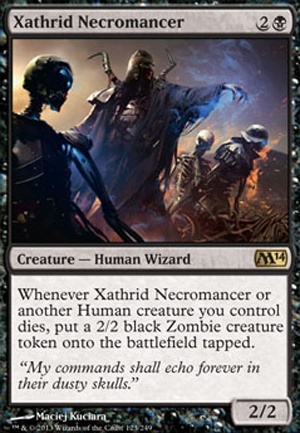 I hope that this hepled you, and I want to mention that I'm heppy to see Wasitora with her cat-dragons in at least one deck :)

I don't apear to have Lightning Bolt , is Shock and Lightning Strike decent replacements? For Act of Treason , should I replace it with Volley Veteran ?

I will replace 2 of the 4 Expedite cards with Trumpet Blast . The other 2 Act of Treasons, I might keep. I kind of like them in the deck.

Walking Corpse could be donned by the Shocks, and the Lightning Strikes can replace Corpseweft , Abnormal Endurance and a Dread Wanderer .

I will try and get some of those cards you recommended, like Goblin Bomb or Goblin Bushwhacker.

Are these cards to janky to be included? :P

Extirpate You know, for tutoring out more Scourges or being sweet mainboard hate! Forbidden Alchemy

Is there any particular reason why this deck shouldnât run Tasigur, by the way? :o

Here are a few suggestions: Liliana's Mastery, Waste Not, In Garruk's Wake, Wit's End, Necrotic Ooze just cus you do have a few activated abilities so it cant hurt to be able to use them from anywhere, Corpseweft and Phyrexian Delver.

Neotrup on Question about creature tokens and ...

If a player would receive priority, first state based actions are checked, this is where tokens in graveyards disappear, second triggered abilities trigger, like Sheoldred, Whispering One's ability, third the player finally receives priority, so they can cast a spell or activate an ability like that of Corpseweft. As the token ceasing to exist is the first thing, you aren't really able to do anything with it.

Also important is that a token is not a card, that's really its biggest distinguishing characteristic. You'll notice that Corpseweft requires you to exile creature cards, Sheoldred returns a creature card, and Jarad, Golgari Lich Lord gets a power/toughness boost for creature cards in your graveyard. Even something that would work before state based actions are checked, like Necromantic Selection, won't work for two reasons, one it too says card, and two, if a token that's left the battlefield would change zones (even to return to the battlefield), it instead remains in it's current zone.