Minotaur spells you cast cost BR less to cast. This effect reduces only the amount of colored mana you pay.(For example, if you cast a Minotaur spell with mana cost 2R, it costs 2 to cast.) 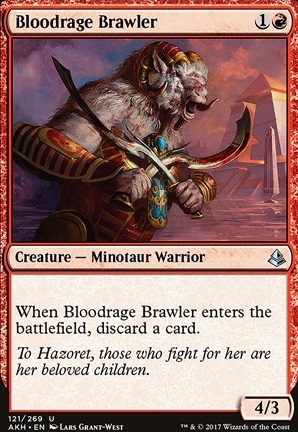 Over The Moon
by stinkybot

Surprising absolutely no one;

Minotaur creatures you control have haste and must attack each turn if able.

At the beginning of your upkeep, create a 2/3 red Minotaur creature token. Until end of turn, it gains +2/+0.

But what cow tribal really needs is:

And for our Ragemonger fans out there:

Minotaur creature spells you cast have Bloodthirst 1 and gain Frenzy 2 and Menace.

Whenever a Minotaur creature you control dies, you lose 2 life.

Dragons hold a special place in my heart, but at the end of the day I get more excited over new Minotaur representation. Not sure why; I just do.

Let's keep it going. Make a tribal enchantment or even several for your favorite tribe.

I run 24 lands in $5 Rakdos Minotaurs, including 3 or 4 dual lands, and it seems to work fine. I tested Ragemonger but found that I almost always wanted a different three-drop on turn 3.

Yo' mama got banged by a bull!

Ninokun: Thank you for the kind words. I think the big problems centaurs have compared to their taurean brothers is the lack of different lords and a "flagbearer" such as Ragemonger , so for now, the minotaurs would propably have the upper hand. Your deck is quite powerful though, so it might work out.

I recommend Ragemonger . You have a lot of 3+ cmc Minotaurs here, and you can get a huge discount on them. An additional trick with this is to add Rakdos, Lord of Riots : if you deal 3 damage with these two out, your Minotaurs cost 1 or even 0 mana. Also, look for some more turn 1-2 plays, since this deck has virtually no options before turn 3. Lightning Bolt is a classic.

One last point: this deck is marked as Standard. It should probably be Modern or Casual.

The 3 Gnarled Scarhide (they'd die) and a Butcher's Glee . If the deck was made more Heartless Summoning-focused I'd also cut the rest of the Butcher's Glee and 2 Titan's Strength (or any 3 other spells) to make room for the rest of the Kragma Warcaller s and Ragemonger s, since they're what let the deck go crazy with Summoning. It could also be worth experimenting with cutting 1 or 2 lands, Summoning + Ragemonger will give you discounts and 20 is enough to get you to 4 lands on curve around 60% of the time (probably the max amount of mana you'd need with Summoning).

I'd say those three are too slow in general, but Felhide Spiritbinder is okay enough if you're not playing too competitively.

In the competitive Modern scene, Aether Vial is used in Merfolk, Death and Taxes, Humans, Spirits, and sometimes GW. I don't think I'd say it's commonly used (as in not every creature deck plays it), but it's definitely a really good card and quite sought after. It's not worth buying a set for your minotaur deck. Vial works best in aggro decks with a high density of 2 cmc creatures, if it were to be put in a deck with more 3 cmc creatures it would be a slower midrangey/tempo type like Spirits or GW (the type of deck that plays Flickerwisp , Blade Splicer , Kitchen Finks , Eldrazi Displacer ) since Vial makes so much free value. Minotaurs has a tendency to go on the higher cmc side of things, but it's an aggro deck that does not tend to go for the value plan which makes it kind of weird with Aether Vial.