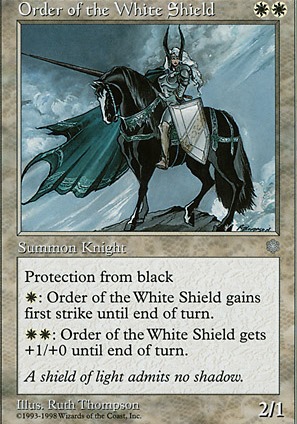 Order of the White Shield

: Order of the White Shield gains first strike until end of turn.

Order of the White Shield Discussion

Ok, thanks. I made some changes based on your input. Replaced Crusade with Swords to Plowshares and made room for two extra Emeria, The Sky Ruin. Also replaced Order of the White Shield in the sideboard with Hidden Dragonslayer, just because I think I'd find more uses for them in the future. Any thoughts?

I had not considered these, but I certainly will. Thanks! The only one I know I have at least one of currently is Cemetery Gate, but I'll check for the others. I need to work on my mana base (to better handle cards with or in the cost), and I've wanted to replace some or all of the Order of Leitburs and Order of the White Shields and/or increase the creature count. Your suggestions will help me make a good start. Very much appreciated.

Playing this against my casual, kitchen table, mono-black vampires deck, this one usually wins. That's kind of expected, since this one is tailored specifically against vampires. The time or two that it's lost in that matchup were due to not having enough coverage in the air. I've also found myself wishing I had a way to remove a black (or red) enchantment.

I also messed up by using Nimbus Wings on my White Knight to make him a blocker for the opponent's Hypnotic Specter. The vampires drew Gruesome Deformity, played it on Hypnotic Specter and swung unblockably. I was holding 3 cards, and of course it was my Defang that got discarded. This version 1.0 doesn't have any way to remove enchantments, though white provides plenty of options. In this case, I'd have been better off putting the Defang on the Hypnotic Specter in the first place and making a flyer later. Live and learn. The anti-vampire deck did win that one anyway, but it was a squeaker.

So, I need to cover flyers a bit better and to speed things up a bit. My vampires usually get ahead and then lose once anti-vampires begin to solidify a board position. Faster vampires might just win faster and kill this deck before it can set up. One thing I've considered (and will likely do) is to put in some cheap white exile stuff like Journey to Nowhere, Unmake, or Erase. For now, I've added them to my Maybe Board. Journey to Nowhere is better than Unmake here, since I'm running mono-white, it's 1 CMC cheaper, and my opponent cam be expected to not have a good way to remove enchantments.

I've not really had occasion to use the pumpability of the Order of Leitbur or Order of the White Shield, and the first strike they and White Knight have is mostly useful only against non-black creatures and spells.

At 14 creatures, I'm reluctant to take any of those out. I don't want to go over 60 cards. Adding creature exile effects will help with flyers too, so I can get both upgrades for one set of inclusions. Also, creature removal will help with most auras too, so I need enchantment exile only for global enchantments, like Bad Moon. What to remove though? I could Sideboard a couple of the Prismatic Wards maybe. At some point, I'll decrease the Karmas, but not just yet. Blazing Torch is a one-of, but I like it for the flavor. Defang has grown on me in play testing. 24 lands looks like about 2 too many to me on paper, but I like the way it has worked in play.

So I have a quandary. I'd like to add some combination of Journey to Nowhere and Erase, but I'm having trouble seeing what to remove or move to the Side Board to make room. Suggestions would be welcome. Thanks.