Whenever you cast another spell that has flash, you draw a card and each opponent loses 1 life. 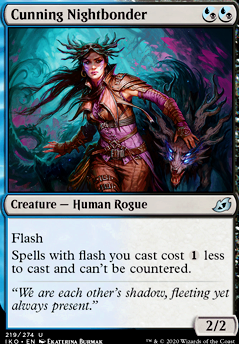 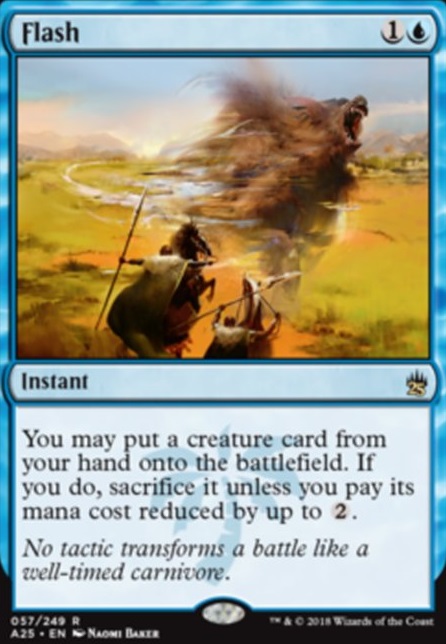 You've done something to the layout, so all the cards are banded together, instead of being spread out into card types (instant, sorcery, creature etc.), as they usually are. Makes it a little harder to look at.

It seems like your deck is very centered around Slitherwisp, but there are plenty of flash cards even if you take out some of the enchantments. That way you can make room for some cheap and efficient interaction such as Drown in the Loch, which is really strong in this deck. Adding some of the new modal lands over basics might also be nice - Agadeem's Awakening Â Flip etc.

For the sideboard, I imagine you want something like:

eEsnowalkerEe with a monsoon of respect, because I am working on my own Flash/Rogue deck at the moment (was looking around to get ideas on tuning my deck when I found yours), if you have to mull to get a certain combination of cards to win (or have a good time) then the deck needs to be tuned. Unless you have a deck like Jeskai Fires where you NEEDED to have 1 specific card in your hand and you can mull to 1 to get it, or unless you have a mad draw engine, then mulling to get a good hand doesn't, in my experience work. When you mull, in most cases you are starting the game at a disadvantage, one that even an ideal draw has difficulty bailing you out of. This deck does draw pretty well as long as you can keep Slitherwisp on the table, but I still think mulling to an ideal draw isn't great. The trouble I have been having with my own Flash/Rogue deck post-Zendikar drop is the speed aspect. I am finding that I have too many bombs and my list is too diversified and I am trying to fit in too many cards that I like because I like them rather than for their impact on the game. I wonder if some of that is going on here. I think Slitherwisp is one of those McGuffin cards that looks like it should be tearing shit up like a madman, and you have some counter to try and keep hold of it, but in my experience when you drop a wisp on the board your opponent goes balls to the wall to remove it and unfortunately, there is much more creature removal (and more creative ways to remove creatures) then there is removal of any other type. I want Slitherwisp to be badass too, I love the card art and the ability, but I don't try to build decks around it anymore. Cunning Nightbonder might also be a problem for you here. It makes your Flash cards uncounterable, but I think a smart strategy of playing around counters or making your opponent counter stuff you want them to counter is better and it frees up space for say, Soaring Thought-Thief which will help you get cards into your opponent's graveyard to make Drown in the Loch better. Drown is great because it works like a counter or as spot removal if you need it, but in order to be useful your opponent's graveyard needs to be full. Massacre Wurm is another bomb in your deck that is an AWESOME card. I drew a double-rare pack with a full art Wurm and a regular Wurm in it and I have been fooling around with some Gyruda, Doom of Depths/Massacre Wurm nonsense in another deck. The problem with Wurm in your deck, is without any kind of ramp at best, you can't cast it until turn 6, and in most cases not until much later and by that time your opponent might be overrunning you. Your average converted mana cost is 2.73, which means you could probably trim a land for something else. I'd also look into dropping Shark Typhoon. I have found cards like Jwari Disruption and Glasspool Mimic can help with a crucial ability in a crucial moment, or throw you an extra land when you are getting screwed. Blackbloom Rogue synergizes well with the mill/rogue strategy also while also giving you a possible land in a moment of need. I have been including a limited number of these double-faced half land, half something else cards in place of regular lands in my lists to squeeze in some extra flexibility. Mind Carver is another card that works well with the mill strategy. I'll be throwing up my own Flash/Rogue list here shortly when I am finally happy with it. I went Grixis and splashed Red for Embercleave, Valakut Awakening, Goblin Tunneler, Spikefield Hazard, and Zareth San, the Trickster.

Since it doesn't have flash or haste, I get the sense Nighthawk Scavenger isn't going to be that impressive. Maybe some number of Slitherwisp for more card advantage and flexibility and Cunning Nightbonder for cheaper spells (and it's also a rogue)?