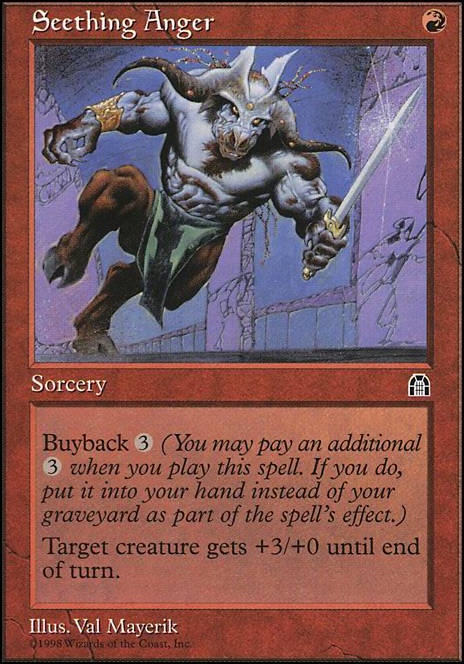 Vadrik in yo mouth
by Chipz

I do see the value of Titan's Strength, I just haven't ever been able to capitalize on it the way my Zada deck plays. I would definitely have lost a few games drawing it instead a stronger buff. The reason usually being, that there is no more draw step after I need the buff spell and it providing one less power than the smallest vanilla buff slot. I will try running it instead of Slaughter Cry for a while, though First Strike provided by the former is usually more important than a fixed draw when I actually need another turn, as it usually means my guys will live where they otherwise wouldn't, considering many of the buffs don't affect toughness. Blood Frenzy and Traitorous Instinct may also be potential slots, but Seething Anger is too important as a Mana-sink and card advantage to exchange.

I recounted my creatures and you are correct, not sure where I counted the remaining bodies, but during test games I found it to be a reasonable amount. Your logic concerning body count is flawed however, as having fewer body generator (and creature) cards in the 99 is not as relevant if the average body count per card is higher. You do have to prioritize body count a bit when deciding whether or not to mulligan though. Otherwise the higher variance will result in a slightly higher rate in blow-out games.

I am not sure how you got the same value out of Hissing Iguanar though, that you get from an additional buff or draw spell. Although it is a Zada target, I guess, I don't see opponents creatures dying to matter as much. Usually it will be your guys, who trigger it at some point. I could see it as wipe protection, but its one toughness actually makes it too vulnerable. Changing the way people play will paint a target on your back though and that won't just hit the Iguanar. So it likely not sticking around (against PDH decks everyone is scared of Zada and is just looking for an excuse to make the Zada player the first target, while EDH decks probably don't consider it as much of a threat) and the most broken thing in the deck actually being buffing Zada and your team and swinging, I really can't see it being worth the slot.

With the Threaten effects, please don't forget, that attacking with an additional commander, that also received all the Zada buffs will fairly often save your ass by killing an additional opponent.

Clockspinning is 1 mana to get 2 counters, or 5 mana to get 4 counters. Do you reckon it has a place here? In addition, flashback and buyback seems really good in this. Stuff like Lava Dart, Artful Dodge, Reckless Charge, and Seething Anger might be good.

I like what you're going for here, but I see some places where you might consider changes. Specifically I like your cantripping combat tricks (buff, commander trigger, and replace themselves, all pretty great), and I like using Prowess creatures to sort of double-dip on the effect your Commander provides.

Your average CMC is nice and low, which is great. Unfortunately you're not running very much ramp, in combination with a somewhat low land count. A deck like this is going to be deceptively mana-hungry - you only get your Commander's buff till end of turn, so ideally you want to cast multiple spells in a single turn to pump the team as much as possible. Preferably mid-combat. Multiple spells means a lot of mana. I'd look at adding rocks, especially rocks that are 2CMC or less. Wayfarer's Bauble, Fellwar Stone, Coldsteel Heart, Star Compass are all great budget rocks for a 2-color mana base. Slightly more expensive are Fire Diamond, Sky Diamond, and Gilded Lotus. Since you're using combat and only running two colors, Sword of the Animist would work well too.

You have a decent number of cost-reducers for instants and sorceries, but I;ve always found that those aren;t really a good substitute for ramp. They're great cards, and if you build the deck with lots of instants/sorceries with generic mana costs they can really help you cast multiple spells in a turn, but they supplement ramp, they can't actually replace it. Similarly, Mana Geyser costs 5 - it's not really "ramp." It's a one-time effect for a big turn, but you need enough ramp to be able to cast a 5CMC ritual in the first place.

You're running several cards that are more optimized for 1v1, 20-life formats. I'm talking about Lightning Bolt, Lightning Strike, and Wizard's Lightning. There are times to play these in Commander, but typically only as part of a combo (Bolt doesnt do much in Commander...unless you can cast infinite bolts, which can be fun). There are much better removal options: Rapid Hybridization, Pongify, Reality Shift, Echoing Truth, Curse of the Swine, Snap, Into the Roil, Commit / Memory, Blink of an Eye. I believe these are all dirt cheap, and most are instants, so you can cast them during combat.

If you can spare the cash (and hopefully it'll get a reprint in the next Ravnica set), Cyclonic Rift is the 2nd most-played card in Commander for good reason. It's some of the best removal available in any color.

Also bear in mind that "copy spell" effects don;t provide additional cast triggers. If you use Bonus Round, then cast Brainstorm, you still only get two cast triggers total, even though three spells will resolve. To get extra cast triggers you need wording like on Isochron Scepter - "you may cast the copy."

Card draw is fantastically important, and so is evasion. Open Into Wonder does both for you. Kindred Discovery would be pretty much perfect for this deck, and I think it came in this precon so you might already have a copy; otherwise I think the price has risen unfortunately. Card is a powerhouse for tribal decks.

Also consider some Buyback cards - you can spend extra mana to put them back into your hand isntead of the grave as part of their resolution. Capsize, Haze of Rage (this one is particularly perfect for you - the combination of Buyback and Storm pumping your entire team is nuts), Mystic Speculation, Shattering Pulse, Whispers of the Muse, and Seething Anger all look pretty good for this deck.

Now, combat damage with no infinite combos is pretty tough to pull off in Commander, where you have 3 opponents typically and everybody starts with 40 life. Thats a lot of damage you need to rack up, and your combat buff effects basically all wear off at the end of the turn, leaving you with a bunch of low-power Wizards for the next turn. I'm going to make some combo-based suggestions - this would be perfectly acceptable in my meta, but everybody's playgroup is different. Some of this will be dirt cheap, some of it will cost a little.

You're already running Isochron Scepter. This card is phenomenal. It can help you pull off your main game plan (smash with Wizards), and it can also provide alternative win conditions that you can use if combat becomes unfavorable.

Scepter imprinting Dramatic Reversal with enough non-land mana sources to produce 2 mana will untap all your mana rocks, all your Wizards...and the Scepter itself, which lets you reuse it. And it casts the Imprinted card, so you get an Adelize trigger every time. You can do this infinitely to make your whole team infinitely large. If your mana rocks can produce 3 or more mana, you also can produce infinite mana.

You can also pair the Scepter with Paradox Engine. This starts to get crazy, because the Engine basically provides the same effect as Dramatic Reversal, but you an Imprint something else onto the Scepter. For example, you can Imprint Reality Shift. Activate Scepter to cast a copy of Shift, targeting an opponent's creature. Engine triggers, untapping the Scepter and your mana rocks. Reality Shift resolves, exiling the creature, and turning the top card of their library into a new creature. Activate the Scepter again to exile the Manifest creature and Manifest the next card of their library. Rinse and repeat until their entire library is in exile. Do that again for all of your opponents who have a creature out. Pass the turn, and let them lose from drawing on an empty deck. You can see how flexible this is. Opponents can stop you with well-timed interaction, but it works super well, and you're playing Blue, so you can hold counterspells to protect yourself. Engine is going up in price, I think its about $20 now, but it's well worth the buy. It'll only get more expensive.

This is a cool deck. There's a lot of damage potential. Some things that have caught my attention:

Hoped this helped some.