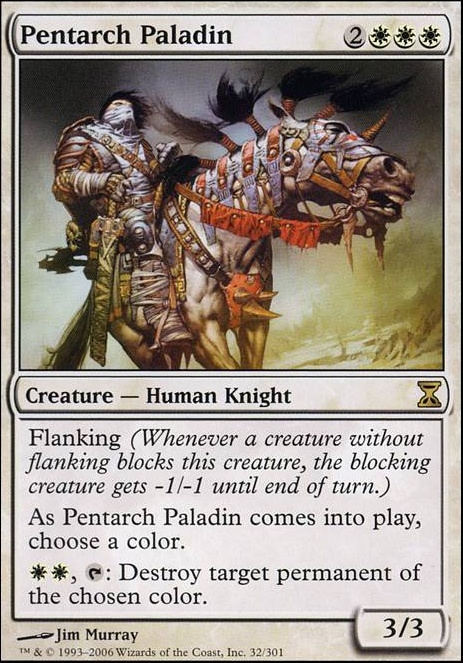 As Pentarch Paladin enters the battlefield, choose a color.

Pentarch Paladin occurrence in decks from the last year

A lot of these are TERRIBLE cards, but still fit the list. A few are creatures with a cast or ETB 'destroy creature/permanent/nonland permanent' bonus effects.

These ones 'might' be stretching your rules, but don't technically break them: Pentarch Paladin Starke of Rath Wild Swing

Definitely needs some Knight of Meadowgrain, probably over the Skyhunters.

Mirran Crusader is an absolute beast; protection from a color known for removal, and double strike is brutal with all your anthems/lords.

If you plan on making a sideboard, Pentarch Paladin is good facing against other monocolored decks.

Stillmoon Cavalier seems interesting, but never played with it before, so I don't know if I would recommend it.

Cards I like... Angel of Jubilation, Angel of Serenity, Avacyn, Angel of Hope still probably a better choice at CMDR, Aven Mindcensor, Evangel of Heliod, Grand Abolisher, Intrepid Hero, Pentarch Paladin, Serra Avatar, Sun Titan, Godsend if you're gonna have this you should add Brave the Sands, Mimic Vat it's a good card but your deck exiles everywhere, Blind Obedience, Eldrazi Conscription you better win after casting, Marshal's Anthem, Mass Calcify, and Emeria, The Sky Ruin.

Rogue's Passage helps keep Balan from being blocked Knight of Dawn and Pentarch Paladin have some flexibility.Pentarch Paladin is also pretty funny with Eight-and-a-Half-Tails too. Buried Ruin, Sun Titan, and Emeria, The Sky Ruin help you get back your used up cards. Steelshaper Apprentice, Steelshaper's Gift, Stoneforge Mystic, Quest for the Holy Relic, and Stonehewer Giant help get you pieces to make Balan stronger but running all of those is overkill, so just use the ones you like.

Mirrorworks makes it so you don't have to spend as many spots in the deck on equipment to get a big result. Argentum Armor, Heirloom Blade, Loxodon Warhammer, Sword of Vengeance and the Kaldra pieces are good on the cheap, but feel free to add Sword of X and Y as your budget allows.

Since you run so many instants, an Isochron Scepter might not be half bad.

Dagger311 on Help me upgrade my Mono-White â¦

Hey everyone, first post here, so I apologize if this is the wrong place. I built this deck out of cards I had in my collection and a few singles.

It works really well at the kitchen table, especially if I manage to get a turn 3 Mirran Crusader into turn 4 Armored Ascension across the board. I've been thinking of upgrading it to make it a lot more aggressive, and was looking for suggestions that won't break the bank. Here's what I'm thinking of now:

-4 White Knight, +4 Knight of Meadowgrain: Protection from black comes in handy occasionally, but I feel like having the lifelink would let me play more aggressively without being very risky.

I'm also looking into running Knight of the White Orchid. Not only is he decent by himself as a 2/2 First Strike for 2 mana, but he has the chance to give me an extra land, and I'm seeing him combo really well with Path To Exile, or even just playing him on curve in a match where I go second. Not really sure what I would get rid of for him though. Maybe Knight of the Holy Nimbus?

Aether Vial would be absolutely amazing, but too rich for my blood.

Can anyone give me some advice? Would these changes be good? Any other reccomendations? I also really need to work on a sideboard for it, I just haven't done it because I mostly play casual and no one else I play against runs one.