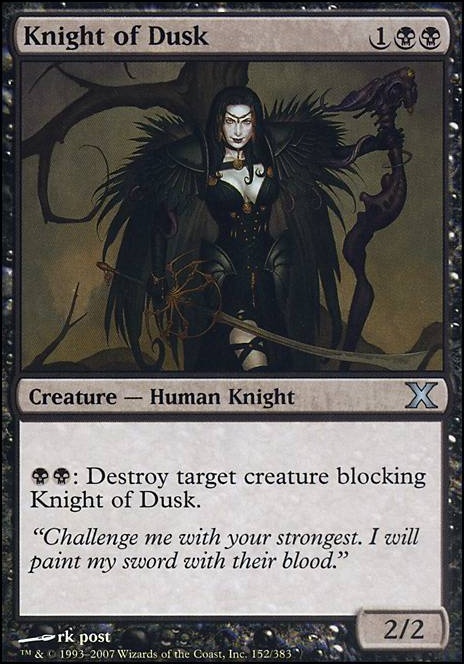 You might want to consider splashing blue for more draw and discard spells like Dimir Guildmage and Dire Undercurrents or even Drastic Revelation. Frantic Search might be a good one too. Those can all add to playing things from the graveyard as well as having stuff in your hand. I'd take out Stillmoon Cavalier and maybe sideboard Arrogant Bloodlord. Fists of the Demigod and Knight of Dusk fit well too. You could always add Terminate if you wanna be that guy.

Cool deck idea though, would love to play against it.

Scathain thank you for these suggestions I will probably take all of them except one. Knight of Dusk is good to kill off creatures aswell. It is used to help me possibly put more stuff in their graveyard. Also you can't cast your commander for the ninjitsu cost so I don't need unblock able. All of the other suggestions will be duley noted and the deck will be advised within a week. Thank you!!

The Urborg Panther, Breathstealer and Feral Shadow combo isn't going to come off often at all, and those creatures are a bit sub-par otherwise, so I'd drop those. Knight of Dusk is also a bit overpriced, its essentially going to end up being a 2/2 unblockable for 3, except slightly worse. I'd replace those with things like Tormented Soul, the dauthi, an Ornithopter, or a Signal Pest to trigger your commander's ninjutsu. For defenses, you might like Ophiomancer and Royal Assassin, both of which should usually outperform Wall of Corpses, and the latter of which would help out your Scarblade Elite. I'd also consider putting in a Ruthless Ripper, which is good either for defense or for triggering ninjutsu.

You also might consider other stuff that like creatures dying, such as Toshiro Umezawa, Harvester of Souls, and Reaper from the Abyss.