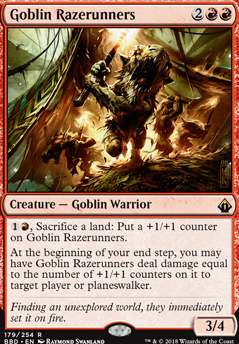 , Sacrifice a land: Put a +1/+1 counter on Goblin Razerunners.

At the beginning of your end step, you may have Goblin Razerunners deal damage equal to the number of +1/+1 counters on it to target player.

I don't dance now, I make cards move
by Laaaseeerrr

Also Just thought about this... Goblin Razerunners would be an interesting addition to this deck...

When Battlebond released, MTGGoldfish made an Estimated Value article like usual, but keep in mind this was right after set release. The important thing to remember from this article is that the reprints hit a floor ~3-6 months after release and then rebound in price. Currently, its been about 2 months since release, meaning cards have the opportunity to drop further, but still rebound in price. The important bit for your pull is that True-Name Nemesis will only go up, as reprinting is VERY unlikely and it is near the low point for price. That said, if you wanna buy a couple boxes of Guilds of Ravnica when it comes out, selling it is still a fine idea as the price increase will probably be pretty slow since its an extremely expensive foil already.

Anyway, the part I'm more interested here is the current Estimated Value of a box, as I mostly forgot how valueable this set is and I bet you can pick up boxes for pretty cheap. According to MTGStocks, the EV of a pack is $4.28 on average and the EV of a box of Battlebond is $154.08 on Average, meaning if you can get a box at (or likely below) MSRP you'll probably get your money back unless you are extremely unlucky like me and pull 3 Grothama, All-Devouring and all your rares are Goblin Razerunners. This is just the average EV (when based on Market price it drops a little btw), but remember that most of these cards have nowhere to go but up, especially the mythics, and then you've got the crazy lottery cards like True-Name Nemesis

. Not only is True-Name an absurd amount of money, but Based on this 7 foil mythics are worth $60 or more, and after that, even the cheapest one, Grothama, All-Devouring is a $15 foil. There are also a few in the $50 range, a few in the $40s, etc. 6 rares have foils worth over $45, and after that there are a few more surprisingly expensive foil rares such as Archon of Valor's Reach at $25. And dont forget that Partners come in pairs, and foil partners are in foil pairs! That means if you pull the $44 foil Rowan Kenrith you also got the $48 foil Will Kenrith. If you pull the $13 foil Pir, Imaginative Rascal, you also got the $10 foil Toothy, Imaginary Friend.

Overall, I think buying a box of Battlebond is probably worth it just for value, and even more if you can convince enough people to come draft it with you (with you of course taking all the cards if you bought the box yourself). And Battelbond boxes are still easily available for under $100 with little effort, and if you want to fight a bidding war on eBay, there are currently auctions for way under $100, but obviously those prices are going up before the auction ends.

So you added Zuran Orb back. Donât need a Mana Echoes and you need to switch doubling season with Primal Vigor. Remove mana echoes and add Goblin Razerunners because I own one.

Another "not so in the spirit of the deck, but works well with Balance" is

Goblin Razerunners. This would probably be more midrangy though, where you're making them overextend with threats and use Balance to wipe the board (with emphasis on their lands) relies on the opponent having a creature out respectively.

Leave / Chance can wipe their board pretty easily, but will probably decimate your hand if you Balance because the opponent will have far fewer cards

Makes sense. I feel like harsh mentor only really stops combo with that heavy threat to their life total, forcing miscalculations where they activate an ability then die to direct damage rather than just viewing it as an extra cost. There are a bunch of cards in red that sorta play into the strategy, but they all have problems. Balefire Liege and Stormbreath Dragon is probably too high mana cost , Barbed Shocker does let your opponent refill their hand, but also it forces your opponent to refill their hand, Goblin Razerunners/Obsidian Fireheart or Jaya Ballard, Task Mage are interesting one-ofs to turn late game wasted resources into extra effect, Mindsparker, Zo-Zu the Punisher and Scab-Clan Berserker are of limited use (i'd play them if they cost one less or had 4 toughness), Sin Prodder provides some advantage, but once again, more three drops. Menace is great though. Thats the toolkit that I can remember from my testing, I hope its of some use.