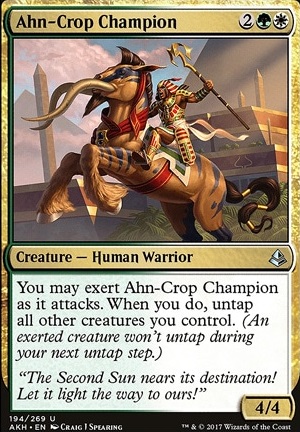 You may Exert Ahn-Crop Champion as it attacks. When you do, untap all other creatures you control. (An exerted creature won't untap during your next untap step) 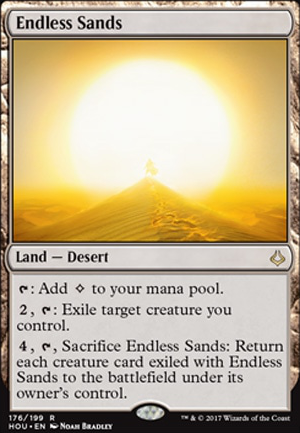 Welcome to Alcatraz
by Mick-Tis

What's your thoughts on the exert mecanic from HOU/AKH bloc?

Whouldn't be Nice create a bunch of tokens from Steward of Solidarity or even Pride Sovereign? And what about some benefits from atacking with Ahn-Crop Champion or swing a 4/4 Life link on turn 3 with Glory-Bound Initiate?

Warriors, come out to play

I second Nature's Will and Druids' Repository and add Sword of Feast and Famine and Bear Umbra. If you want to go infinite with Cryptolith Rite add in Ahn-Crop Champion or Reconnaissance. Reconnaissance also has the added effect of avoiding combat.

If you want warriors with excellent attack triggers, take a look at Alesha, Who Smiles at Death, Arashin Foremost, Blood-Chin Rager, Brutal Hordechief, really all the warriors from Tarkir and Amonkhet. There's also some really cool equipment like Blade of Selves and Helm of the Host that will help.

I'm not sure I follow how this can go infinite. Combat Celebrant says "if it hasn't been exerted this turn."

Unless you have infinite turns, or make infinite copies, I don't think this combo works. You can get two combats, for sure, which is still good, but you miss your next combat even if you untap it with Ahn-Crop Champion, because it still doesn't untap all your other exerted creatures.

Struggled vs the merfolk rush a bit, but did overall well considering the deck is not physically complete yet. As you mentioned earlier Vizier of Deferment is really crucial here. The Ahn-Crop Champion felt useless after the 3x Radiant Destiny tbh, used 2x trueheart duelist for whatever reason as replacement for glorybound.

The merfolk deck owner is a irl friend of mine and never used deckbox before. Would you be interested in having a look at his MF deck and giving some input or would u prefer that he contacts u himself? his user is Gjerde