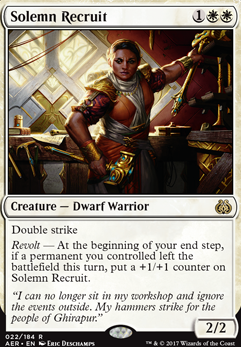 Revolt â At the beginning of your end step, if a permanent you controlled left the battlefield this turn, put a +1/+1 counter on Solemn Recruit. I would start by cutting some of the cards that do incremental scrying on creatures. In my testing, they have not shown their worth in the deck. Omenspeaker, Augury Owl, Suture Priest, Kor Skyfisher, Solemn Recruit all look like creatures you could do without. You should try using cards which grant draws like Cloudblazer, Mulldrifter, Oath of Jace and Demonlord Belzenlok. I'd take out both Oblivion Ring and Detention Sphere and in their places run Act of Authority, Oath of Liliana or maybe Reality Acid. I would drop Chromatic Lantern and Crucible of Worlds entirely. You have enough mana rocks without the lantern, and quite frankly your commander can act as ramp with it's -1. I would cut the Entreat the Dead as you have other reanimate outlets. I'd probably also cut a couple of cancels and pseudo-draws. a Sensei's Divining Top would be pro right here. Sorin, Grim Nemesis is an over-performer in this deck if you can net one of those as well. Ob Nixilis Reignited also works great. Both planeswalkers allow for multiple removals if Animatou is out. Good luck with your Aminatou deck. It shows a lot of promise!

I feel recurring the miracle cards may be a bit much, esp since I forgot Temporal Mastery.

As for the cuts, I wish to keep Solemn Recruit as it is a target for Sun Titan that can quickly become a threat. Obzedat's Aid I have just realized doesn't have many targets outside of creatures to immediately bring back for value, so I will make that cut. I feel Boomerang is just too useful of a utility and control card to remove, and with a cheap cost as well. It's also tutorable by Spellseeker and can be an immediate answer to a threat or save a permanent of mine from a threat. I'd rather remove the more expensive 4 mana board wipe, Damnation. This will be easier on cost and I already own a WoG. I can remove Increasing Devotion as I wanted more utility out of being able to use my graveyard, but 15 1/1s at most over that long of a time frame isn't helpful as I originally thought.

@FiveEightFiveBC: It's a very useful tool because of that reshuffle, at a cheap price too! Ah, Commit to Memory is a very useful card, but not for this deck, so I didn't include it.

I play Solemn Recruit in my / flicker deck.

OUT: Ajani, Caller of the Pride, Taj-Nar Swordsmith

@IzzetSeer: I think Aeronaut Admiral is pretty important actually, sure it dies easily, but so does Sram, Senior Edificer etc. He's especially important in the late game where he can literally win games or turn the tide by making all your ground vehicles fly. Then again this deck is more focused on vehicles rather than dwarfs.

Same thing with Speedway Fanatic, a hasty Skysovereign, Consul Flagship is too good not to pass up. And depending on the board state they might overlook this small creature.

Solemn Recruit seems pretty good but I dont have a way to consistently trigger revolt so its less impactful.

Man I tried Aeronaut Admiral and I found it pretty lackluster. With the human typing it dies super easily. Ditto Speedway Fanatic. Have you considered Solemn Recruit?

Mirage Mirror seems very good, I should try that out.