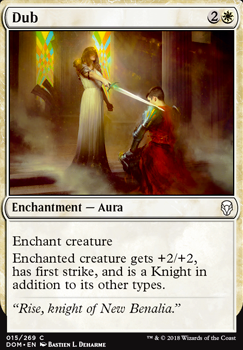 Enchanted creature gets +2/+2, has first strike, and is a Knight in addition to its other types.

Haakon and Zur go to White Castle
by Aeolus-Wind-King

this deck is pristine, my friend. I would update it to some of the Cavaliers from m20, specifically Cavalier of Night . I woukld cut Blessing of Belzenlok , as there are better combat tricks, even if the creature is legendary(specifically Battle Mastery ) and all your Ajani's Welcome (No lifegain payoff). I would add in two addition History of Benalia for constaincy and a playset of Murderous Rider , sutting out Dub and 3 Moment of Triumph .

The Void of Mass Confusion and to Many Key Words

The Void of Mass Confusion and Too* Many (Key?)Words ;)

Sweet deck, young planeswalker; it seems most formidable. I have a couple thoughts about ways you can totally max out the value in every card in the deck!

Basically, I think you want to maximize the chances that all the creatures you have on the field are working together.

In general, you want to maximize your chances of game-winning synergy. I think these changes will help smooth out the mana curve, provide reliability to the central combos of the deck, and will add versatility to the things your deck can do in 'edge' cases.

Obviously these are just suggestions to help get your brain buzzin'. Here are some other zesty critters with keyword abilities: Pestilent Spirit Would work well with a more control-y and less aggro-y creature build Ochran Assassin (with a critical mass of creatures already on the battlefield, this could win lots of games) Elenda, the Dusk Rose Gifted Aetherborn

Have fun sorcering! Your Bro

Interesting deck idea, i think you should capitalise on the whole historic mechanic, since you have a good engine base here, its just a bit messy. I think cards like Weatherlight and Board the Weatherlight would be useful here, as well as increasing Danitha Capashen, Paragon to a 4 of, Jhoira, Weatherlight Captain to a 3 of, Valduk, Keeper of the Flame to a 3 of and Shalai, Voice of Plenty to a 2 or 3 of. Shes very strong. Of coarse this means dropping some non legendary creatures, like Champion of the Flame , Adanto Vanguard and Storm Fleet Sprinter , i like Siren Stormtamer in here for protection.

omg and you can use Urza's Ruinous Blast effectively too! Thats real nice.

Now with this Legendary synergy going on, I think 3 Blackblade Reforged is your best equipment! I'd drop the 2 Short Sword for the extra two copies. I also like Forebear's Blade over Sigiled Sword of Valeron so its up to you which one you want to run, but you'll want 2 copies over 1 of each, in my opinion. I like being able to move the equipment for free on Forebear, but making dudes with Sigiled Sword is good too. Your call here.

What do you think of Dub and Frenzied Rage for potential auras? I just dont like Aether Tunnel, but if thats been working for you then keep it!

I think Dive Down is great, how do you feel about Sheltering Light and Make a Stand (for DB at least?)

And yes, i hope you pull well for the land base, it will speed it up immensely!

Best of luck! +1 I'd like to see where you take this list. It looks interesting. If you got some time, i'd appreciate if you could give me some feedback on my deck? Song of the Conclave (Tokens)

This deck is cute, and I'mma let you finish, but there's some issues here I wanna point out to you.

First off, the land-base is wayyy too low. You want 24-25 lands with cards like Lyra Dawnbringer, Shalai, Voice of Plenty, and Kwende, Pride of Femeref jammed up in here.

Also, I feel like if you have the budget to put in Resplendent Angel you may as well put the full playset in, because that card is BOINKERS.

Last point, relating back to your curve, is to try to get your 2-mana spells at least slightly higher than your 3-mana spells. I would suggest specifically, to drop 2 copies of Dub (only particular valuable with Kwende, Pride of Femeref interaction as well as a copy of Forebear's Blade (two is good with Danitha Capashen, Paragon, but it's kind of slow to set up imo to be drawing multiples). Serra Disciple is a fine replacement, and should be a 3-of at least, if you're going that route, because you want to reliably draw one early to get the most value of it's ability.

Ok, card suggestion time: 1. Blackblade Reforged!!! Seriously, you run so many legendary creatures here, and this card can quite reliably prove to be of the most porfitable cards in your deck. E.g. Turn 3: Cast Danitha Capashen, Paragon Turn 4: Cast AND equip Blackblade Reforged to Dani, and swing LARGE. What's not to love?

Alright, that's it for now, thank you for heeding my advice. I urge you check out a similar brew I just worked up I'm really proud of, found here: http://tappedout.net/mtg-decks/resplendent-vampires/

I will cite that both of our decks have the same "competitive meter", which I firmly disagree on. That's not to say your deck isn't just as competitively viable at a conceptual level, but the effort I spent gathering statistic data, to grant this deck a favorable outcome in the probability that it's going to pop off in one way or another, should be picked up on by the "competitive meter".

I played a version with the suggested modifications over the weekend and I like the way it's going.

I found the first strike in Dub to be surprisingly relevant when put on Vine Mare, the lower toughness is definitely a draw back but it helps with that.

Also, I switched out the Druid of Horns with a play set of Jade Guardian, the hexproof is definitely needed, but I'm concerned with the adding more to my top end if I also include Shalai, Voice of Plenty , especially because she doesn't protect herself.

The Druid of Horns is good if you get it out early enough, the beasts are great chump blockers against other aggro strategies, but they have been moved to the side board.