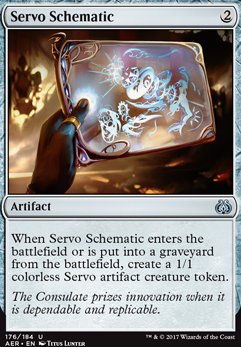 Independent Study in Artifacts
by sevocean

Nice brew. The only card iâm skeptical of is Servo Schematic , which feels both out-of-theme, and sub-par

One of my favorite commandants actually are the Shattergang Brothers , and I think that you can add somthing in this deck:

I hope I helped you, I liked so much this deck+1!

Isn't Servo Schematic better than Cogworker's Puzzleknot here? It makes 3 sacrificable artifacts total while Puzzleknot only gives you 2 at most since you don't get another servo when it isn't sacrificed to its own ability. There's also the niche situation when you go Sharuum --> Cataclysmic Gearhulk with a Puzzleknot and a servo on the battlefield; if you had a Servo Schematic out instead, you would come out with one extra servo after Gearhulk's ability resolves. I guess the ability to create 2 servos can be useful too, though.

I think, because you splash a lot of possible, a playset of Evolving Wilds, and a single plains, and swamp could help a lot, instead of the one-of dual lands. I'd also imagine that Servo Schematic would be better than Cogworker's Puzzleknot.