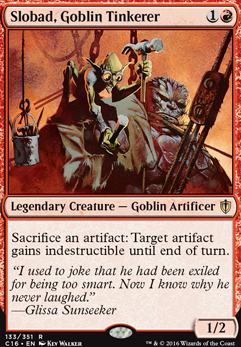 Sanctified With Dynamite
by Jay3401 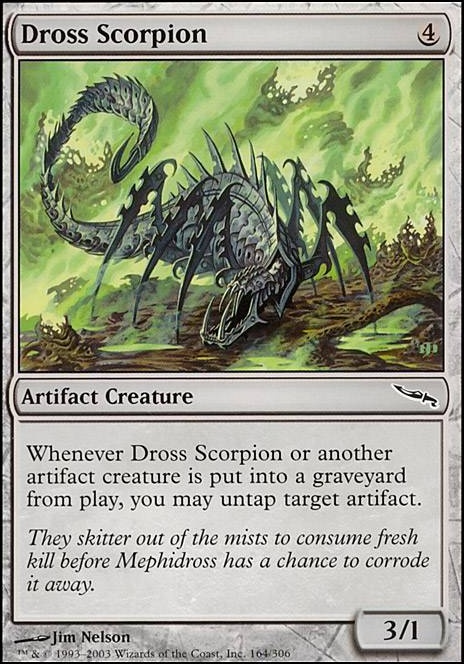 Lecture by Prof. Osgir: how to handle artifacts
by kasprl

Artifact on artifact tokens with a dash of randoms
by geereg 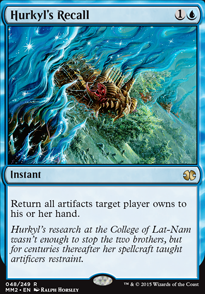 Time to Build an Engine (Primer)!
by Seraphim7

+1 Put a charge counter or +1/+1 counter on target artifact.

Looks like Slobad gave up his spark to bring back all the people whose souls were being used as fuel by Memnarch. He was also a planeswalker for only like twenty minutes--he got a spark from Glissa, but didn't do much with it. The second ability is straight from Slobad, Goblin Tinkerer .

Anyway, create a card showing a literal or metaphorical release to freedom--broken chains, fulfilled duty, something like that.

Interesting deck, mine goes more in the combo direction (based on the word "artifact" instead of "creature"), basically a bad Breya with two less colors and with the opposite piece of text on his cardboard (she's the sacrifice outlet while he's what I think of as a Second Sunrise in the command zone).

I like the use of Gift of Immortality, can't believe I never thought of that -- I even have one floating around somewhere, I think.

Also, I might suggest Second Sunrise and Faith's Reward over or in conjunction with Eerie Interlude and its cousin Ghostway because they can serve much the same purpose and have the added utility of comboing off with Gerrard that way (although I suppose you don't have that third piece of the combo).

Of course, all of this advice comes from a player who's Gerrard deck started as a Slobad, Goblin Tinkerer artifact combo deck that I try not to play to often because turns are annoyingly long, so maybe ignore this comment entirely.

Oloro_Magic Thanks! I will definitely try it out when I get the chance. And as to the decklist, I'd heard of the combo before but had always struggled to piece together how it worked (the only ones I can understand just by looking at the cards are artifact sac combos because my friend has a Slobad, Goblin Tinkerer commander deck. Your explanation really gave me the know how of what to counter (if I can) and just how it works in general.

Baclash Ideally the token generation system would be to repeatedly bounce/blink Breya as often as possible, though that's definitely not the only way - the deck is based on Thopters, but they definitely aren't the only thing you need to produce. Treasures and clues also build up your artifact count and can net you wins with Hellkite Tyrant and Mechanized Production. Card draw is a bit of an iffy thing, in my experience with this deck. I recently put in Thopter Spy Network to give a bit more, plus Padeem, Consul of Innovation and Trading Post can both draw some cards. Usually, however, it isn't too bad since you can hold on to your mana should you need to activate Breya in a pinch; in an ideal game, you can get most of your important pieces out onto the board already and save your hand for as-needed situations. In regards to counter magic, I agree that it doesn't have a ton of counterspells. I have Ertai, the Corrupted in the decklist to try and alleviate that, but I don't get to play super often and have yet to play him in a real game to see how effective he is and I'll make adjustments accordingly. It's a bit vulnerable to wipes, though I have a few workarounds: Slobad, Goblin Tinkerer can protect a few key pieces from removal, and Open the Vaults is the best (but not only) option for graveyard recursion if you can't cheat/fetch out your DS Forge. And in regards to mana/ramp, I also agree that the deck is very light on that, but with how many fetches and multicolored lands I run it has yet to fully mana screw me in a real game; once you get one of each color active, you can cast Breya, and with how many multicolored lands it has odds are you'll have two of any colors you need (mainly blue or white). I only get to playtest this each Friday afternoon, so it's still very much in the "test it and see what cards underperform and should be cut for more mana" stage, but I really enjoy playing this deck.

Hey NV_1980! THanks the both of u for the reply on my deck! the Alhammarret's Archive is there for the daretti +2 effect and some more card draw effects in the deck. Having said that, the first part of the card does nothing indeed. I Do think i have a mystic forge in my collection so i will definitly give it a try in my next games!

The Treasure Nabber sounds like an awesome card! Havent heard of it before but i will make sure i get my hands on 1! Slobad, Goblin Tinkerer has made very little to zero impact on my games so i was thinking of replacing him anyways! I like this suggestion alot!

I will have a look at the decks u 2 made, but i already noticed its... ALOT of decks!