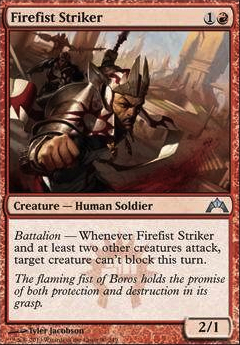 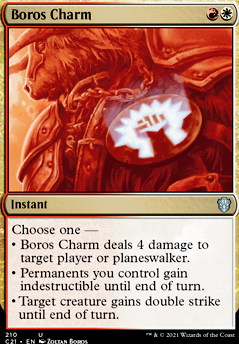 Monastery Swiftspear is there more for the turn 1 attack than prowess. I also find it works well with Goblin Wardriver, Reckless Bushwhacker, and Firefist Striker.

boros is fun. i would recommend 4 Boros Reckoners, 4 Akroan Hoplite (these do a ton of damage), and 3-4 Hanweir Garrison + 2 Hanweir Battlements.

Mentor of the Meek for card draw. 2x Elspeth, Sun's Champion and 2x Assemble the Legion. these cards get out of hand quickly.

Iroas, God of Victory is a good card.

i would take out Wojek Halberdiers and Firefist Striker. i would keep your creature curve at 4 mana tops, and a few higher mana noncreatures.

Hi there! Glad to see you're making your first commander deck! Let me be the first to welcome you to the format and offer some quick basics. Of course it's up to you to decide whether or not to change it up but I hope you find some of this helpful!

1st up commander is a pretty slow format compared to 60 card formats like modern, legacy, or even standard at times. Since it's so slow people can get away with playing cards with powerful effects but sub-optimal mana costs such as Terastodon, Jin-Gitaxias, Core Augur, and Akroma, Angel of Wrath. As such, it is important that you're running some removal to deal with big baddies like them or massive token armies that can be made from cards like your own Assemble the Legion. Luckily, R/W has some of the best removal out there. I'd recommend adding at least 3 targeted removals like Path to Exile, Swords to Plowshares, and Return to Dust as well as at least two emergency board wipes like Day of Judgment or Fumigate.

2nd, all commander decks utilize a few "mana rocks" to ramp into the ever increasing cost of their commander (since it increases by 2 for each additional time cast from the command zone) as well as some basic mana fixing for multi color decks. They say you're supposed to start with 40 lands then subtract 1 land for every 2 mana rocks but feel free to tinker with the ratio. Some must haves for your list would be things like Chromatic Lantern, Boros Signet, Sol Ring, Gilded Lotus, and Coldsteel Heart. I know it's kind of a bummer to "waste" slots on more mana but trust me, the consistency for having the colors you need is worth it.

3rd, while it is important to have an early game, commander games are long. Real game winners are the big beefy creatures you can drop around mid to late game. It's a big change from 60 card, I know, but small aggressive creatures like Ainok Bond-Kin, Firefist Striker, and Boros Elite will just be disappointing draws the longer a game drags on. Swapping them out for removal or end game threats like Victory's Herald or Gisela, Blade of Goldnight helps to always have the ace in the hole when your armies just don't seem to be enough or get destroyed by board wipes.

Lastly, even in creature heavy decks, it's important to have good creature to non-creature spell ratios. For something as aggressive as red/white you can get away with around 40 creatures, 38 lands, and evenly spreading out what's left among instants, sorcerys , enchantments, and artifacts. Unfortunately, 52 creatures just ensure you always have a creature to drop in a format where you can always cast your commander.

I apologize for the wall of text but I hope it was helpful. If you ever need help or just have some commander questions feel free to contact me on here!

I was just checking out other Grenzo, Havoc Raiser lists and came across yours. I like alot of the choices you made, and added Goblin Vandal to my maybe board. I think there are better choices for some of the cards your running, Like Pyreheart Wolf seems to just be a worse version of Caterwauling Boggart, and Pia and Kiran Nalaar would be better off being Siege-Gang Commander. Firefist Striker could be replaced with Goblin Heelcutter. Also it seems quite a few cards just feel out of place and could be replaced with more powerful cards, perhaps even goblins to make use of Goblin Kings mountainwalk since Blood Moon is in your maindeck.

I would considering cutting and finding replacements for the following:

Hanweir Garrison with no Hanweir Battlements in your mana base?

I just do not think these cards are strong enough in the long game for commander to be worthwhile. Many of them are fine standard or modern staples, but as a 1 of alone I dont think they are worth it when you have so many better options in your maybe board. If you are curious, this is my take on Grenzo and why I chose many of the cards I did. I hope this helps, and have fun with Grenzo!

wow...first i thought "why the hell is he playing all that...is there some combo i missed in there [frantically searching the deck list all over again]" and then i saw the all two-drops-theme...nicely done!

I do have some suggestions that could potentially upgrade the deck...

since your commander can already produce mana: Myr Superion

your hand will be emtpy pretty fast: Lupine Prototype

If you opt to include Myr Superion you might also think about adding the mana myr for red and green: Copper Myr + Iron Myr as well as Life's Legacy + Myr Retriever and/or Carapace Forger

Since most of the cards also fit a tribe you already have in the deck, your Tribal Forcemage should become better as well

I hope this deck will be loads of fun for you.

Kezvin I had included a copy of Akroan Hoplite once, but I took it out because I only ever had one and other cards were competing for space. Firefist Striker is a super important card in order to push past defenses your opponents might have, so I won't cut it. Maybe Mizzium Mortars, but that's the one removal spell I have. What are your replacement suggestions?