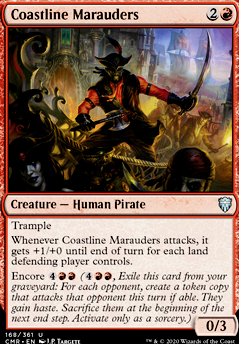 Whenever Coastline Marauders attacks, it gets +1/+0 until end of turn for each land defending player controls.

Oh So Salty and Mean
by yggup 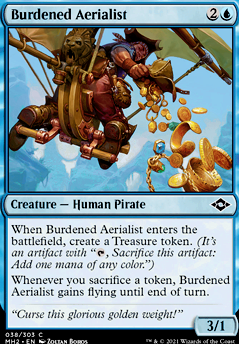 Prosper: Having a good Tome
by Coward_Token 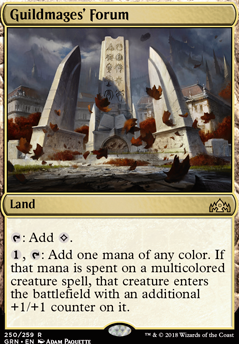 Isshin, Two heavens as one
by _Decaf_

Isshin, Two Combats are Better than One - EDH
by TheBearKat 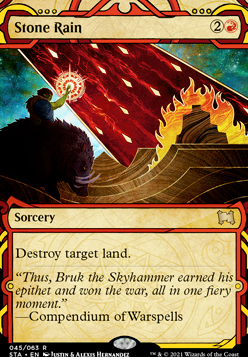 If I may suggest a cut starting point, I think you could probably cut Alesha. I love her, she's what my Mardu deck was before I converted it to Isshin, but she is only able to reanimate 9 of your 21 creatures. I think the rest of the cuts will come to you the more you play and get a feel for the deck. When I make cuts, I tend to look for cards with the most narrow focus, or that have a very narrow/specific synergy with the deck overall

Do the extra combat effects feel reliable to you? In play-testing they felt hit or miss for me, or like they needed Vigilance anthems to get the most out of them. To me, the extra combats felt like hoops to jump through when you can instead anthem up damage and hit really hard in single swings.

Some other creatures that punch pretty heavy on their own, especially with Isshin, and in vein of Unquenchable Fury:

DrMengueche your suggestions sound interesting as i also sometimes run my Saskia deck in some 4 player pods. Do you have a list i could take a look at?

Also i am not sure i would say that Coastline Marauders is bad in multiplayer as it can deal a ton of damage for a 3-drop and late game it can be encored to get the last damage through.

Cool deck! Honestly seems like a surprisingly good Voltron commander, as you can get several combat steps out of nowhere. Maybe adding in some swords or things with double strike like Shriekmaw would give it, like QUADRUPLE strike! Just cool for an, oops surprise lethal!

Surprised not to see a Kiki-Jiki, Mirror Breaker in there somewhere! It does infinite combo with Combat Celebrant , but even if you choose to play it just for value, you can get a lot of miles out of copying Scaretiller , Solemn Simulacrum .

Reverberate Shunt and Deflecting Swat are all useful if you're finding yourself playing in a counter heavy meta! Just redirect the counter to any of these spells. Coastline Marauders is one of those cards I think is a very good underrated budget card! Glad to see it getting some use!