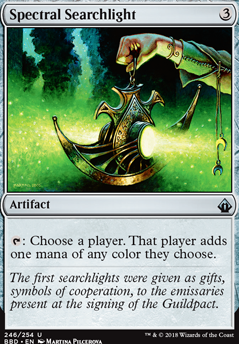 : Choose a player. That player gains one many of any colour they choose.

Spectral Searchlight occurrence in decks from the last year 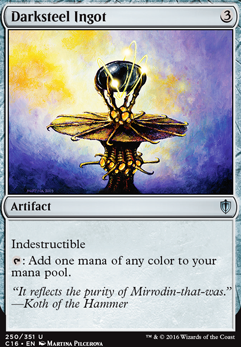 Thrower of Tetanus
by mginner14 Narset of the Target on Back
by Iv4ldy

Give Me Your Hand
by checkdown

Death and Taxes plus Walls (Witch)

Spectral Searchlight seems to be on theme here.

Kynaios and Tiro of Meletis EDH

This deck looks like you're not feeding it enough . 4 color decks are tough, especially without the pricier duals. Exotic Orchard , Spectral Searchlight and Chromatic Lantern can all help with that though you'll probably want even more blue sources than that. The Searchlight also plays into the group hug theme.

Humble Defector is another card draw for opponents that will probably get abused right up until it is too late.

For playing a short time you did a nice job! But there are a few cards that you need to scrap as fast as possible (in my opinion). Those cards are Manalith and Cystbearer . For Manalith are better options and Cystbearer does not do somehting with the rest of the deck. Try Chromatic Lantern , Commander's Sphere , Mana Geode or Spectral Searchlight . Or use something like Cultivate or Kodama's Reach to ramp.

Maybe also use something to protect yourself with something like Sphere of Safety , Propaganda and Ghostly Prison .

I also mis Daybreak Coronet in your deck. It is a solid aura for a low cost.

Good that you use board wipes! But what if you could protect your commander more ( Shielded by Faith )? Than boardwipes would become even beter.

I hope this helps. You are on a good way and keep having fun :)