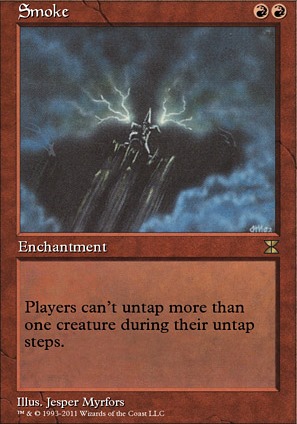 Players can't untap more than one creature during their untap steps.

Smoke occurrence in decks from the last year

Hazoret the Immortal Kamikaze
by Trashcan 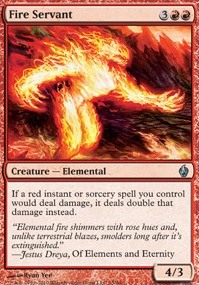 I agree Griff. Uril, the Miststalker, Narset, Enlightened Master, or anyone else with built in protection would be better and allow him to switch out only 1 color. Red also gives access to Smoke which is worth its weight in gold in voltron strategies.

Rafiq is weird that he wants you to go wide in order to attack tall... that's a lot of wasted deck space that could be ramp/voltron cards imo.

This is a nice list. I do have a few suggestions though and I'll try to break it down by category.

Pillowfort: Smoke is worth its weight in gold here. You probably have enough extra turns/combats that you can drop the Propaganda/Ghostly Prison though.

Haste: Need for Speed, Mass Hysteria, and Hall of the Bandit Lord. If Narset gets removed a lot in your meta... also consider Dragon Breath, which auto-hastes Narset on recast.

I have a few suggestions for you and I'll try to break it down by category.

Tutor/Topdeck Manipulation: Long-Term Plans and Brainstorm (Dream Cache is another option to get cards from hand on top of your library for free cast).

Auto Haste: Dragon Breath will automatically enchant Narset every time you recast her.

PW: Ral Zarek is handy for his untap ability (Strionic Resonator is easily my favorite target) and his ult is pretty easy to hit for 2-3 extra turns.

Feel free to check out my list for more ideas, it's one of the top rated Narset lists on this site. It's not budget friendly as a whole but still plenty of options. Upvotes on any of my decks are appreciated. Narset, American Beauty